What Is The Number Of Active Hive Accounts? | Data On Accounts by Posting, Curating, Transfers and Custom JSON Operations | December 2021

@dalz 78
about 1 year ago
LeoFinance

I have done this report back in August, when Splinterlands was just starting its journey to massive growth. Since then the game has created more then 700k accounts and on occasions has 500k active daily players.

How has this affect the overall number of active Hive accounts? 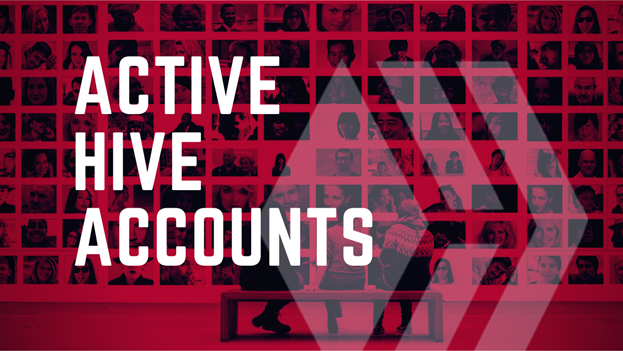 We will be looking at the activity on the chain by the top operations made:

Apart from the above, reading, or page views, is also a crucial part of this ecosystem, but this type of operation is not stored on the blockchain. There is some general traffic websites that can be used for this, like https://hypestat.com/.

First let’s take a look at the number of accounts that are posting on the blockchain, as one of the core operations. 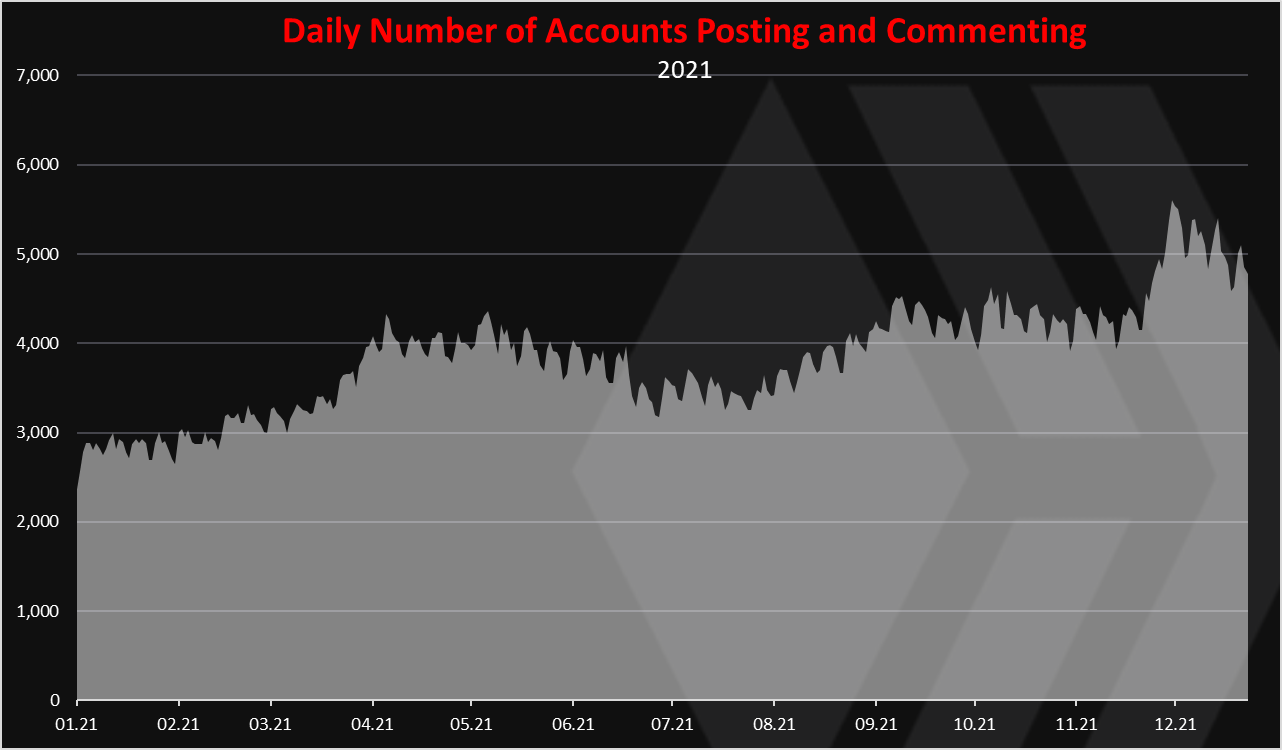 The above is the chart for DAUs, for accounts making posts or comments on the blockchain.

We can see a slow up trend through the whole 2021. At the beging of the year there was around 3k accounts posting and cometing on a daily basis. In December 2021 this number is just above 5k DAUs.
There has been a small drop in the summer when the overall crypto market tanked.
On a monthly basis, in January there war around 9k active accounts, and in December 16k accounts.

Overall, quite a steady number of accounts posting and commenting with a steady growth.

How about then number of accounts that vote. What is their number? After all the voting feature on the blockchain is at its core. Rewards are distributed via votes.
Here is the chart. 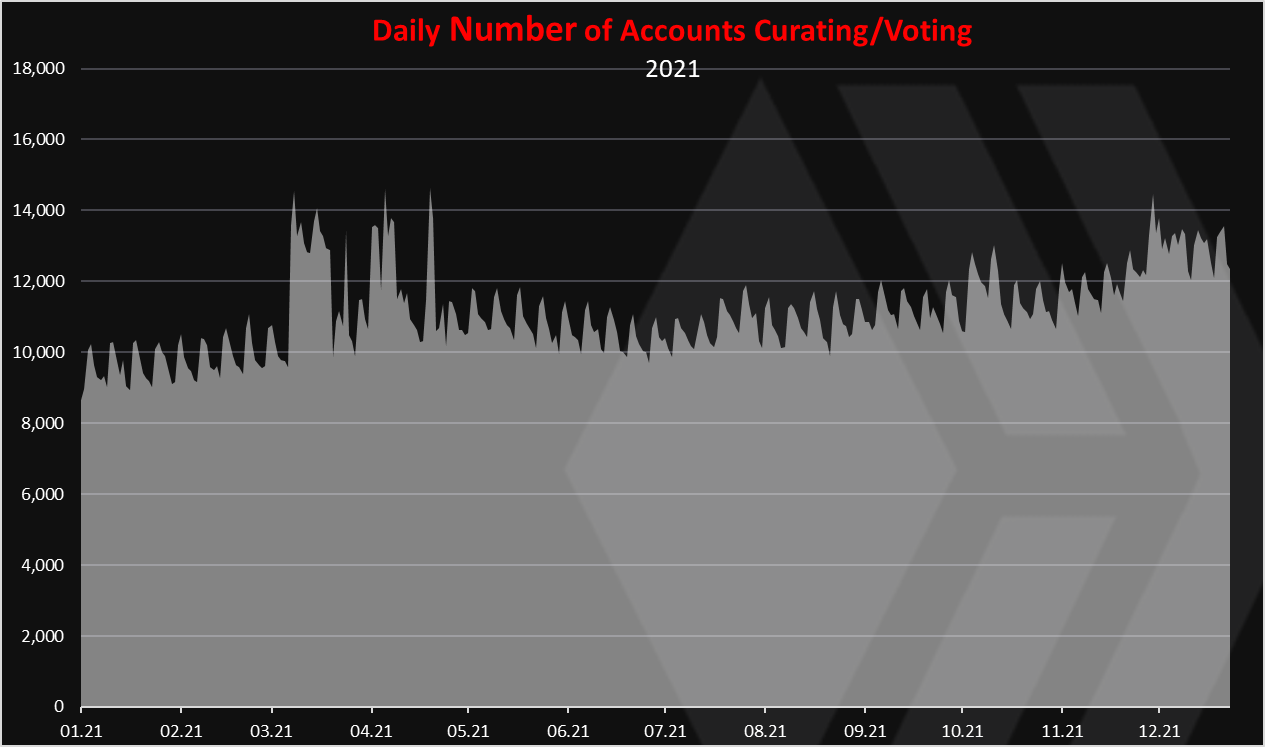 In 2021 the number of accounts voting/curation has been between 10k to 14k per day, with a slow growth through out the year.

On a monthly level the numbers are from 17k to 23k MAUs.

Number of Accounts That Are Making Transfers

What about the basic crypto activity? Transferring value. How many users are making daily transactions? Here is the chart. 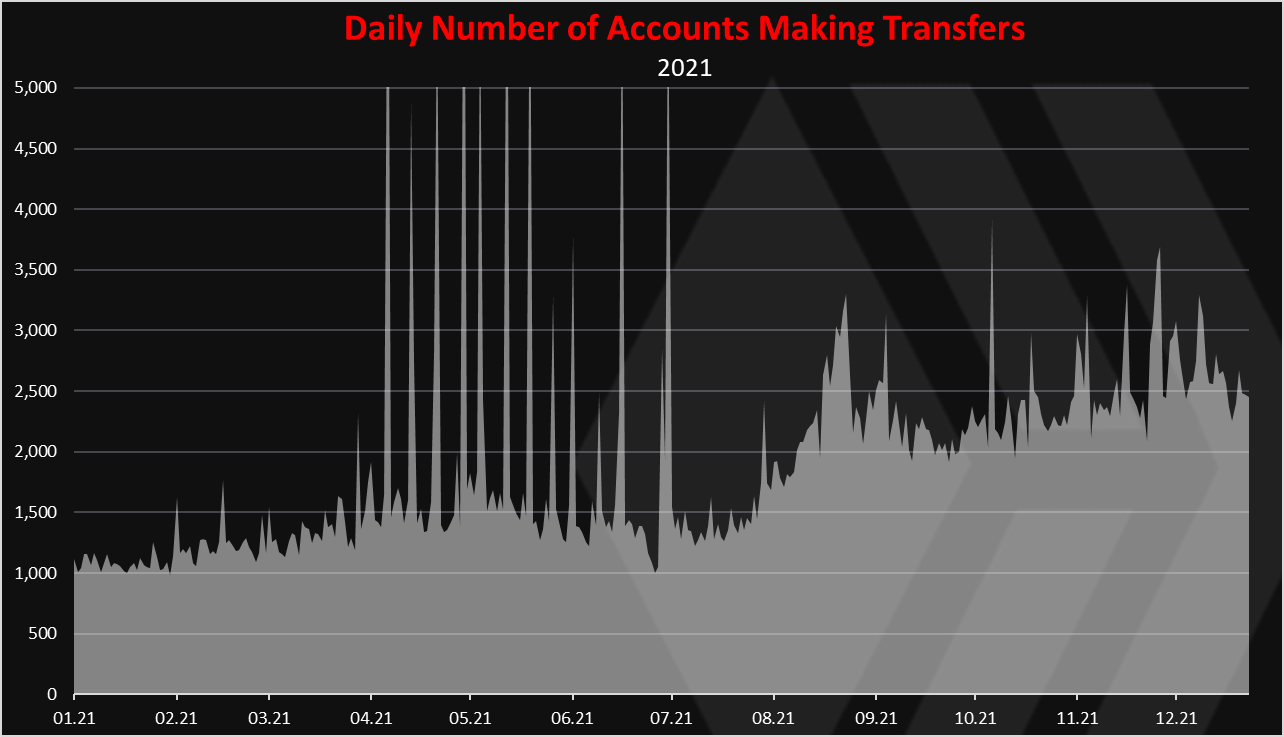 The number of accounts making transfers started with around 1000, the it had a few spikes in May and June, and a steady growth after that toward 3k MAUs in December.

then it spiked, along with the price spike at the time. Afterwards it has been around 1000 accounts per day.
In the last period it is around 1500 accounts making transfers per day with some large spikes.

Number of Accounts That Are Making Custom JSON Operations

Now let’s take a look at the mains suspect. The custom json transactions! 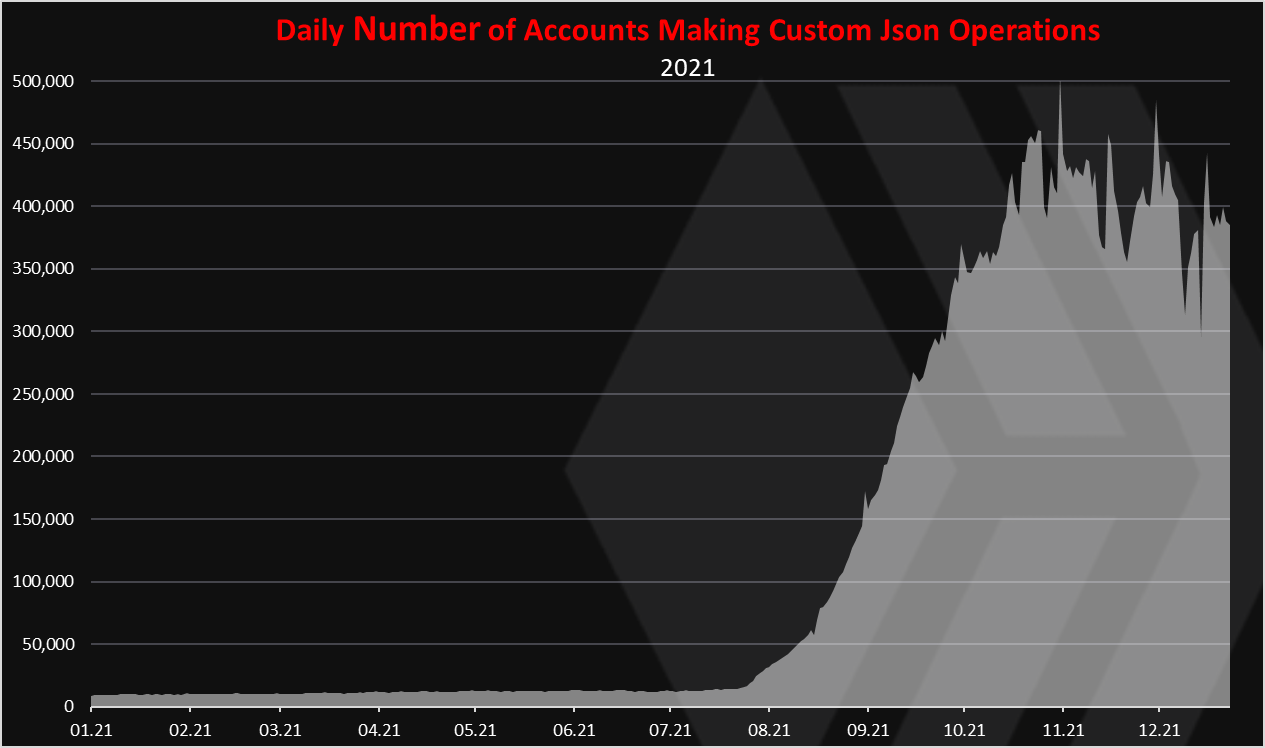 On a monthly basis there is around 700k MAUs. 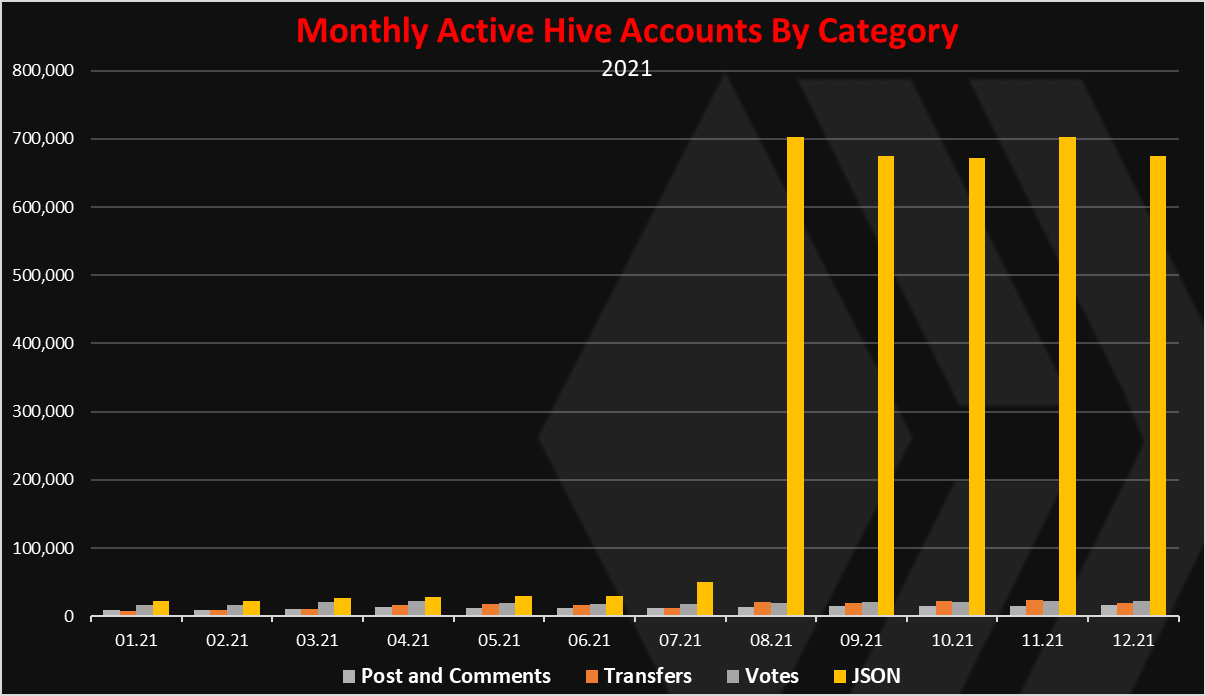 These numbers are compiled from the top 4 activities described above.

A total domination of the custom json operation that are coming from Splinterlands. While by the other metrics there is around 20k MAUs, the MAUs for jsons is a massive 700k!

The number for accounts posting, voting and transfers has seen some growth in 2021, doubling or tripling, but the number of accounts making custom json operation has exploded for x70 times.

When we compare the number of active accounts per type of operation in the last month, we have this.

Note that December is not over yet, so this numbers will be even higher.
Voting comes on the second place with 23k MAUs, followed by transactions and then posting.

Since the main dApp build on the Hive blockchain is a blogging platform the obvious question is how many readers it has. The numbers presented above are about authors, curators, gamers, etc… users that actually interact with the blockchain with some action.

The number of readers is not stored on the blockchain. The interesting thing is that there is more than one frontend to the blockchain, no there is no one single point of entrance to count.
According to https://hypestat.com/ the numbers for unique daily visitors at the moment are:

These numbers have went slightly up in the last period as well meaning more readers heating the web apps powered by Hive.

Thanks for the data.
Peakd has been impressive with lots of features :)

Peakd is one of the benchmarks for Hive. The success of that bleeds over into the entire system.

In the last period it is around 1500 accounts making transfers per day with some large spikes.

Is this a typo? It looks to me more like a baseline of 2000 active transfering accounts at the last few months.

A lot changes for Hive with more users.

It is great to see how all of this is coming together.

That's it. I believe more will happen next year

A great piece of work. Love seeing the advancement over time.

Some might brush the numbers aside, since many of them are small relatively speaking. However, when we look at the growth rate, that is what is important. Small numbers that double or triple over a year, if done annually, will really add up over a few years time.

My guess is that ProjectBlank helps to improve the lower end numbers, like posting. That is going to cause a bunch of new people to engage with the blockchain.

A lot of platforms will kill for x2, or x3 growht per year :)

Thank you @dalz for these statistics, it's nice to see we are growing nicely!
Merry Christmas, Lee :)
!ALIVE

Do we know what the total number of accounts are on Hive? 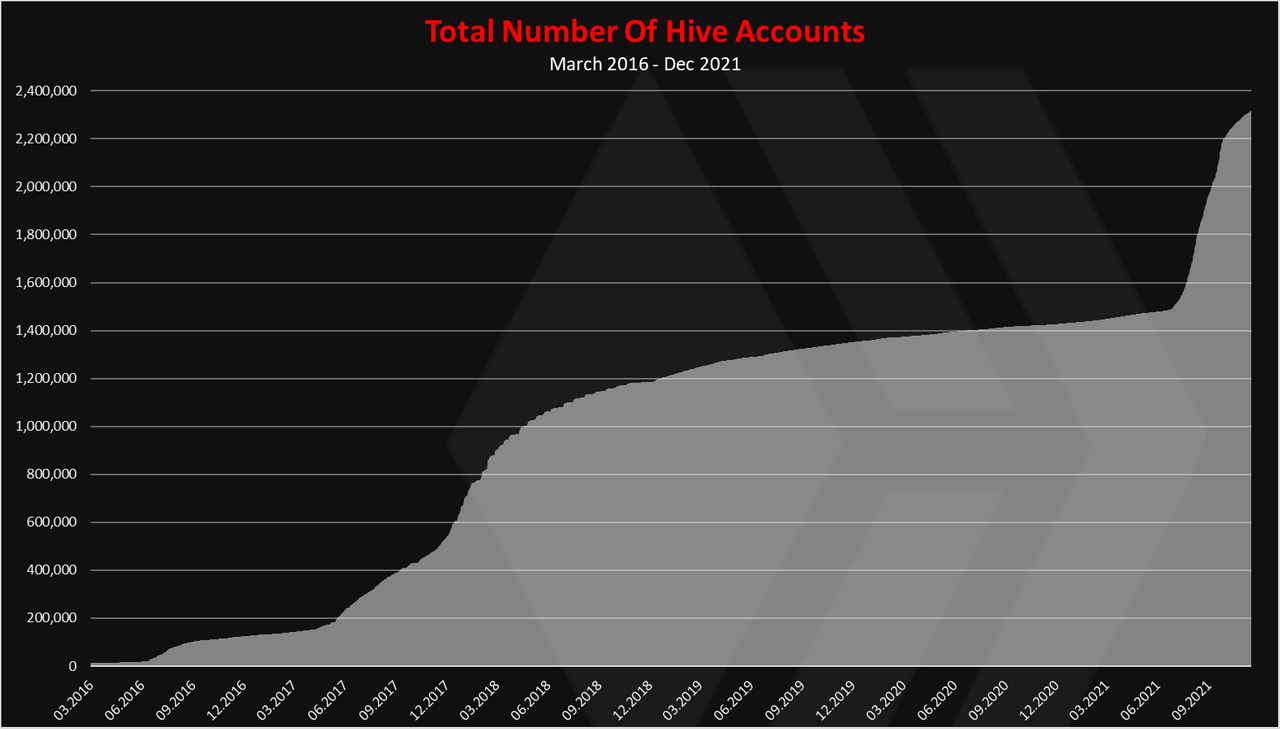