Untamed NFTs Might Be One Of The Hottest Investments Right Now!

khazrakh in LeoFinance • 4 months ago

The other day I've read an amazing article by @flauwy dubbed The Hyperdeflation Of Splinterlands: Why The Cards Are Exploding In Price. He covers a lot of interesting topics in the article so if you missed it, get over there and give it a read. One of the main takeaways is that the supply of out of print Splinterlands cards is declining quickly. This is a common theme for any trading card game. Once cards are no longer printed the total supply can only go down. People keep them to play with them, others loose either the card or interest in the game and thus it gets harder and harder to acquire older cards.

In Splinterlands though, this effect is amplified by the fact that you need to combine (and thus burn) additional copies of a card in order to get a max level card. So cards not only leave supply because they are removed from circulation, they are actively removed from existence. While this whole concept certainly has some negative implications in terms of balancing and Pay2Win, it's amazingly good in terms of adding value to existing cards. If you intend to get an Untamed set common to the max level, you will have to burn 400(!) copies of that card. For a card like Serpentine Spy below which is traded at around 0.08$ each, that's a chunky 32$ right now. 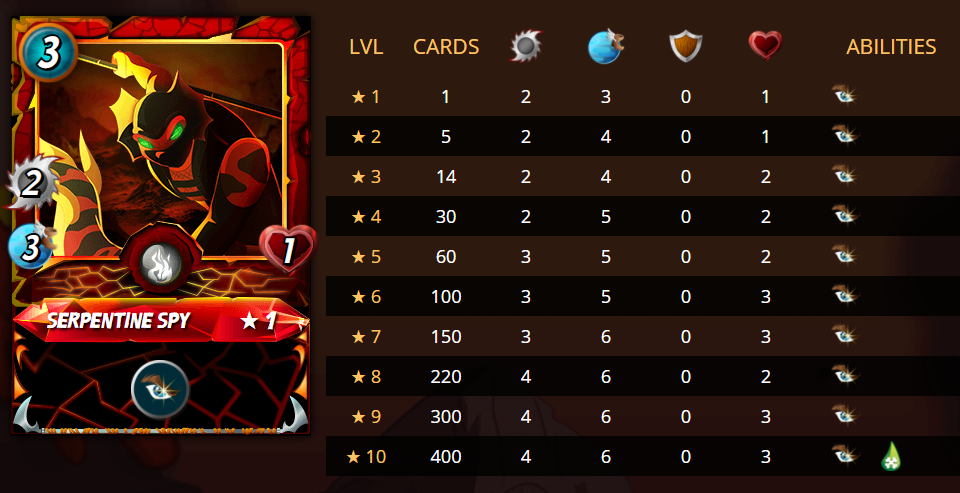 Untamed is the current edition of Splinterlands and there are still about 430,000 booster packs to be sold before it goes out of print. The older sets called Alpha and Beta are already out of print. Because of that, most will consider these cards to be the best investment opportunity right now. Without doubt, there are some awesome deals still available but more generally speaking, I consider Untamed cards to be one of the hottest investment opportunity on Hive right now. Let me walk you through the reasons why:

Splinterlands is probably the best blockchain game there is right now

This is not necessarily a reason for Untamed only but it's important nevertheless. Interest in Splinterlands is growing steadily and I feel like we are getting closer to a tipping point where we could see even more rapid growth. This is obviously important simply for the fact that Splinterlands NFTs will only retain their value if there are people interested in the game. But on top of that, it means that these remaining 430,000 packs could be gone a lot sooner than what people are expecting. In the last 14 days alone, about 70,000 packs were bought or won. That's about 5,000 packs per day. At that rate, Untamed would go out of print in roughly 3 months. Considering that demand is only going to go up, I'd say that it could happen even faster.

Once Untamed goes out of print, we'll eventually see the release of Splinterlands next set called Chaos Legion. That's not everything, though. Right now, all cards can be played in ranked, no matter their set. With the release of Chaos Legion, this will change fundamentally. From there on, there will be two separate queues with separate prize pools. A Wild West queue where all cards ever printed will be playable and a Modern queue where only cards from the two recent sets will be playable - Untamed and Chaos Legion. Getting into the former will be rather pricey and somewhat unattainable for new players so their focus is obviously going to be on the latter format. But while there will be new Chaos Legion cards coming from Chaos Legion packs, there won't be any new Untamed cards introduced to the system.

Without knowing any details on Chaos Legion, any player hoping to be competitive in the higher leagues will need to have access to at least some key Untamed cards. That's not to say that new players won't eventually go for Alpha and Beta cards as well, but the initial push will be for Untamed cards. At first glance, it looks like there's a lot of supply for these cards but I'm convinced that they will dry up pretty quickly. If you wanted to buy 400 copies of the Serpentine Spy seen above, the last copies would already cost you around 0.23$ per card simply because there are not enough copies listed at more reasonable prices.

Also keep in mind that there will be more Chaos Legion boosters sold than there were Untamed booster packs. This will ensure that Untamed should be around for quite a while in Modern which will lower the sets supply more and more. This should in turn bring prices for Untamed cards to where Alpha and Beta cards are today and possibly even higher. This leads us straight to my last reason:

Key cards from these early sets are already a lot more expensive than what they were some months ago. This obviously is due to their dwindling supply. So while there are still deals to be made, getting singles from these sets is getting more and more expensive, up to a point where it just might not be worth it any more. Just take a look at the Cerberus down below.

The cheapest maxed copy is traded at 65$ which equals 0.57$ per level 1 card. If you wanted to buy a single level 1 card, though, that would be 3.1$, so almost 6 times as much! Thing is, new(er) players will usually not buy a maxed level card right away but instead try to get their hands on some singles. So while you might be able to get some sweet deals with these older cards, truth is, it will be a lot harder to sell them again. At the same time, selling Untamed level 1 cards should be rather easy and straight forward.

So if you want to finish your collection of older cards, now is the best time there ever will be to still get max level copies at somewhat reasonable prices. But if you want to make an investment to eventually turn a profit, I'd definitely go for Untamed cards. As always, this is obviously not financial advise and there's no guarantee at all Splinterlands is ever going to take off the way I expect it to. Nevertheless, I feel like Untamed NFTs are one of the best if not the best investment opportunity available to me on Hive right now and I wouldn't be surprised to see many Untamed cards at a comparable pricing like the Cerberus in a mere 6-9 months from today!

And that's all from me for today. Thank you all for reading and see you next time!

I was thinking along similar lines as far as untamed is concerned. I still have packs to open but not sure whether to keep doing and buy the cards I need from the market or open the packs first.

I'm also left with a number of Alpha and Beta stragglers. As you say they will get harder to sell as singles but I don't think I'm willing to part with them just yet. 😂

I wouldn't part with them either - they'll get harder to sell eventually but their price should go up more.

Couldn't agree more. I think anyone, even non-gamers, should consider buying $1000 worth of in-game credits with a credit card; buying 575 Untamed packs, and just sitting on them for 2 or 3 years.

Absolutely! Even if you don't intend to play yourself, just getting the booster packs now is a great investment opportunity! Who needs Bitcoin when you can have Splinterlands NFTs ;-)

I think that the exposure that Splinterlands got once launched also on WAX was a key factor for tremendous growth. Couple that also with the income Guild Wars and Lands and you've got the perfect ecosystem to thrive!

Top notch analysis as usual, really wishing I found your articles on publish0x sooner and started playing earlier. But really glad I'm playing now and hoping I still have enough time to progress and collect some of the untamed set in the coming months :-)

Best of luck to you, glad to have you with us :D