The hybrid monster known as the Manticore

This week's theme is to share a battle with the dragon monster MANTICORE. It's an EPIC reward card and comes with a melee attack. 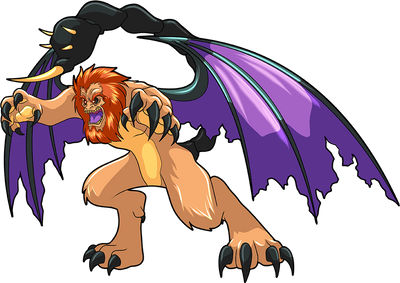 MANTICORE is an EPIC rarity reward edition monster that lies under the dragon deck. I like this monster because of its multiple abilities, like Reach, flying and Thorns abilities at level 4. So it's a great monster with that many abilities and has good health too. It was a 29 mana battle with Fog of War rulesets, I'll explain each monster used in the battle below.
So, let's move forward.

I went with Drake of Arnak Dragon Summoner, it gives +1 armor to all friendly monsters.

In the second place, I used the EPIC Manticore level 4. I used it in second place because of its reach ability so it can attack from this position. I often use this monster in second place and it works well, especially when there is earthquake ruleset so its flying ability does its work.

The third position was covered with Fire Spitter. It's another EPIC reward monster with the flying ability and has a good number of ranged attacks. It's also useful for low mana battles especially for the little league.

Next, I used level 6 Divine Healer, it's a life tank healer monster with the slow ability too and a magic attack. Its tank heal ability is good but slow ability makes problem when we got reverse speed rule and there is no choice, but tank healing is important so I even use it in that rule.

At fifth place, I went with another oldie legendary Black Dragon, its another reward monster that is out of print now but it has many abilities. It has four abilities at level 3 which are Flying, Life Leech, Slow and Strengthen. So its slow added with divine healer's slow made my opponent double slow.

Lastly, I used another reward dragon monster Serpentine Mystic level 4. I like its Affliction ability and it really helped me to win this battle by causing my opponent unable to heal.

I went with 4/6 dragon monsters and all of them are cool ones, out of those four the winner is Serpentine Mystic because it kept afflicting my opponent and made me win this.

Do you use MANTICORE often?

Regarding Manticore, I always use it when I get a chance so it's a must for most of the battles. I use it for earthquake, little league, melee mayhem, and super sneak rulesets.