@costanza 73
about 2 years ago (Edited)
Splinterlands

Dark Energy Crystals (DEC) is the In-Game currency of the Spinterlands game on the Hive Blockchain. The economic model the game runs on is quite interesting and indicates the price of DEC should go up at least with +33%. Here are the reasons why....

The economic model of nearly all digital games as we know them right now is pretty straight forward. You pay money to purchase the game which goes to the developers and the distribution platforms (Steam/ App Store / ...). Many games also allow players to earn or buy in-game currency in the form of gems which can be used to progress getting certain in-game items. All of the paid money for this also goes to the developers & distribution platforms and both the items and the gems themselves can not be sold whatsoever making them completely worthless aside from some fun you get from them.

Splinterlands allows players to play the game for free so everyone can try if they potentially would enjoy it (warning: some work still has to be done to make the initial experience better). Unlike regular games, Splinterlands allows a free market where players are able to sell the in-game items (cards) and the in-game currency (DEC) they either bought or earned by playing the game. The game sells a 10$ priced Summoner's Spellbook which unlocks the ability to start earning these rewards along with some other perks. This 10$ goes directly to the Development team and is needed in order to keep the economy healthy. If it was allowed to make unlimited accounts for free, bots would totally take over making thousands of accounts to grind out micro rewards killing both the game experience and the economy of the game.

This system makes it so that it is favorable for players who want to grow their collection and earnings to first buy from other players instead of giving their money directly to the devs. Only when the demand is bigger compared to the supply, it will be cheaper to buy things in the game directly giving your money to the Development team. This makes for an entire in-game economy that needs to stay healthy as real rewards are given out while the devs ultimately also want players to buy directly from them.

Everything in the game that can be bought can also be paid for with the in-game currency the game is rewarding players with at a pegged conversion rate of 1000 DEC = 1 Dollar. This makes it so that players who earn DEC can undercut the 1000DEC = 1$ value making it cheaper for players who want to buy something in the game to buy up those DEC that are offered on the market.

The Dark Energy Crystals are being traded on multiple exchanges.

They are currently trading way below the 1$ peg going for a 40% Discount mostly because there is quite some sell pressure from players who are grinding out rewards trying to sell them while very few new players actually know they can get a huge discount by buying DEC on the market and using that to buy packs or other in-game purchase. 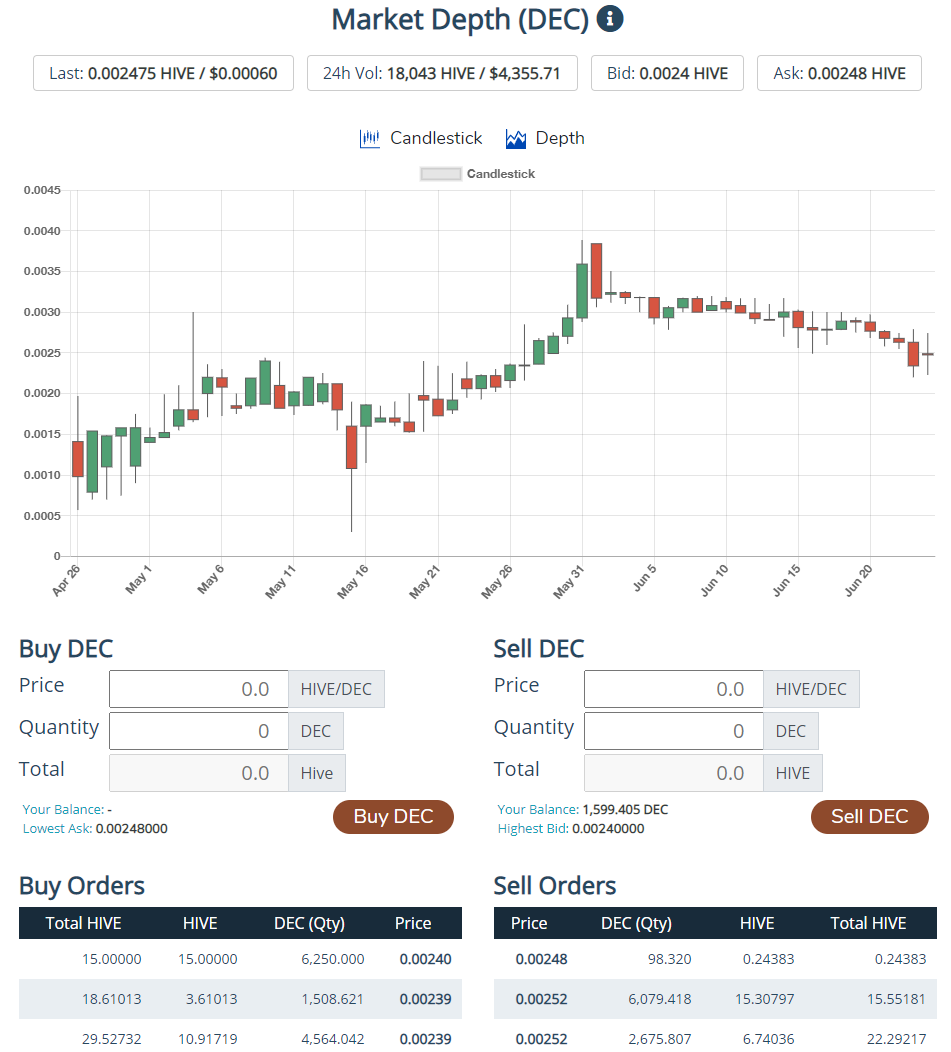 However, there are multiple reasons why the price of DEC is bound to increase and get closer to the pegged 1$ for 1000 DEC again.

How much DEC Playing Earns
I am making very detailed monthly Splinterlands Earnings Reports where I break down everything I managed to earn from the game including DEC. Last month I managed to earn around 43847 DEC from both my accounts combined. To see the details check these posts.

(These earnings come from playing the game 30 min+ daily for the last 10 months slowly but surely building my card collection which by now adds up to 1000$+ total value. Don't expect to replicate this from the start) If you want to try out Splinterlands for free and use my Referral Link you will get a great head start in case you end up getting the 10$ Summoner's Spellbook which unlocks rewards and so much more as I will lease a whole bunch of extra cards to you (See Full Promo Sign-Up Deal). When you sign up without a referral link you also won't be getting a random card from the @sl-giveaways which is a promo the Splinterlands team is still running.

It certainly feels cheap ATM, probably not helped by a BOT sell off of Betas.

I remember during the Halfing promotion DEC rose considerably. So there is definitely potential.

I'm stacking mine for Land, I'm trying to keep my stash about 500K.

Maybe the sellers want to take advantage of getting DEC for the cards knowing it will rise in price.
I was greedy during the Halfing promotion and wanted 0.95$ for 1000 DEC but it only got around 0.90$
No brainer right now to get into dec if you plan on buying land, I guess the burn factor will now be way higher compared to the last pormotion.

It really feels like a no-brainer getting some DEC to sell at a higher price once the sale goes live. in worst case you get your money back. The conversion hassle and possibility other crypto shoots up in price while waiting for DEC to move makes me just hodl everything I earn right now.

Good luck on getting some good land!