@costanza 73
about 2 years ago
Splinterlands 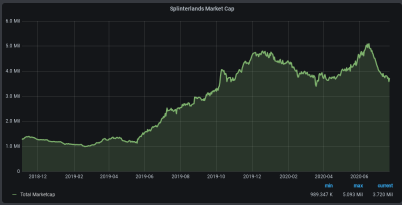 Splinterlands has been somewhat in a slump lately when it comes down to card prices and the value of the Dark Energy Crystals (DEC). I see the current period as a perfect accumulation zone and both started buying some more cards and DEC with an eye on the long run. Here are the reasons why...

Reasons For The Price Drops

So for as far as I understand, when Justin Sun bought Steemit it completely split the community which created the Hive fork. The Korean Community on Steem supported Justin Sun and those who created the Hive blockchain didn't only fork out the Steem.inc Ninja Mined Stake but also everyone that voted for the Sockpuppet accounts as Witness (The Korean Community) (See Hive Airdrop Exclusion List). Splinterlands was put in between the fire because they could not stay on the Steem Blockchain because it became highly centralized while at the same time they had many big Korean players/investors who were threatening to quit the game if they left for Hive.

Long Story Short, Splinterlands made the move to Hive and some of the Korean whales are selling their collection. (At least that's how I understand it)

When looking at how big of a collection some of these whales have, they are forced to offer them at a discount price in order to get them sold in the short run. This is basically what has been happening this last month causing both the price of cards & the price of DEC to go down a lot.

When Will The Selling End? Basically, the cards that are being dumped need to be absorbed by existing and new players before the values can go back to "normal". The 2 accounts that are selling are @th12-m00n & @j6969. Looking at the current list of biggest cardholders, it can be seen that they have dropped in the rankings already. The overall drop in prices also lowered the overall value of the most valuable Decks.

New Bitcoin / Altcoin / DeFi Bull Run FOMO
There currently seems to be quite some hype for a new 2017 bull run and everyone seems to be hunting highly speculative coins that have the potential to go x100. Splinterlands cards simply do not have that potential in my view. This doesn't mean a nice profit along with some solid returns can be made on them with the favorable risk/reward ratio. Right now, the main theme in crypto land is DeFi, Gaming is very well suited for crypto and at some point, Gaming is likely to become the main narrative creating more demand compared to supply making Splinterlands card prices go irrationally high pretty much the opposite to where they are at now. (This is the time when I plan to sell some of my collection)

I already wrote an article about this almost exactly a month ago (Splinterlands | Reasons DEC Price Will Go Up +33%). The price of 1000 DEC at that time was somewhere between 0.53$ and 0.63$. It dropped at one point to a low of around 0.38$ and now came back to around 0.47$ which is still 50% below the Pegged Price. Since you receive DEC when you sell cards, the whales who are selling cards also need to sell DEC they receive for them in order to fully cash out. This makes it so that both DEC and Cards are potentially undervalued.

Buying Card, Packs and Land (in the near future) is way cheaper using DEC which can be bought from players instead of directly buying from the Devs. Since the game continues to grow in numbers combined with the fact that the whale selling pressure will eventually decrease, the current highly discounted prices are bound to end at some point.

Splinterlands has turned into my go-to game pretty much replacing Hearthstone which I used to play in the past. I have noticed myself buying cards just for fun and collecting growing a bit stronger each time to climb up in the ranks higher and higher. Based on my own experience along with the data I'm getting from the ones that signed up under my referral (see Onboarding 100 Players) and the activity from the Development team, I'm quite confident that this game has got a future and quite some growth left into it. We are barely getting started and the real gaming community which is absolutely huge is still fully untapped ground.

Sing-up Deal
I aim my referral link to be the best possible link for new players to try out the game by leasing out a lot of useful cards which gives them a big head start to quickly overcome the early stages in the game without them having to invest in cards. The Referral earnings give me an indirect return on these cards I'm leasing out so I continue to build my collection to always be able to improve the deal I'm able to offer and provide everyone who takes me up on it with enough extra cards.

To see the latest deal I have on offer check Splinterlands | July 2020 Sign-Up Promo Deal!

The game has a mechanic where cards can be burned for Dark Energy Crystals. This is how much DEC they can be converted into:

(Note: The latests reward cards are seen as Untamed Cards in terms of DEC Value)

This amount is for every card (BCX) so if you have a Level 2 card that has 5 single cards combined, the DEC value when burning goes x5). The major implication of this is that (unless the game completely dies) you will always be able to get money for the cards from the DEC you get in case you burn the card while the value of the cards has the potential to go way above that minimum guaranteed value. Many cards are currently trading way below the DEC value based on the current price and the Peg of 1000 DEC = 1$.

High Level Summoners
Many of the cards that are currently being sold by the whales are fully leveled-up Summoners. Summoners are probably one of the best investments in the game as everyone needs them since they are the bottleneck if you want to play higher level cards. Right now, the game doesn't really justify the general cost of Max level decks and the higher the level, the fewer players there are who aim to get there which makes it that these cards are being offered for sale at prices way below the cost of a single card (0.38$ vs 1.25$)

For those that somewhat have deeper pockets and are planning to make Splinterlands their main game, these cards are potentially a steal.

Unless the game is fully death (which is highly unlikely given the data), right now it looks like it is an excellent Accumulation Opportunity to stack up some more cards and cheap DEC for future expansions which will cause both the demand and burn rate to increase a lot. This is what I am personally doing. I will use the extra cards to both grow my ranking and improve the Sign-Up Deal I'm offering. From the DEC I'm currently stacking I will likely use half to buy land and half to cash out once the price reaches around 0.80$-0.85$ or higher again for 1000 DEC.

Well written up, I've been doing the same, especially stacking DEC, although I've only actually managed to maintain that given the cards I've bought rather than increase it.

I think one has to be careful with the summoners - bit too rich for me personally.

maybe some of the maxed legendaries too, good chance to pick up a few gold dragons.

However, I'm just holding out a little bit longer to buy my level 3 Hydra! They're still not selling even after several price reductions.

The summoners are kind of tricky. You really need them but having them at level 8 is kind of overkill at the moment. The gap in price between getting a level 5 having to buy single cards leveling them up and getting a level 8 which has 5x more cards into is not all that big though.

I have mostly focussed on buying cards that are most useful to lease out to affiliates, which has been a really good use case so far allowing to earn some good returns on those while I'll be able to sell them one day.

I just have to have L8 summoners, I'm too used to having 'all' the buffs at max level, there's a few cards where it's crucial.

I tend to to focus on good value legendaries/ epics. I'm very tempted by a second Gold Dragon!

STANDING OVATION for this final concept !!!! :)

Yes :-) I like to keep it real and pretty much include that in every Splinterlands post where I kind of promote the game. You see so many of these crypto games where people get in just with the objective to earn which is bound to end up in a disappointment.

thanks for the info!

Good write up and some interesting thoughts on the situation at the moment.

I have collected the indications of some who, like you, have thought of accumulating DEC. So I bought DEC.