Since discovering PC games, I was a fan of the dark side. I will definitely be a Sith Lord not a Jedi Knight, as my favorite class was Undead. Necromancy was my top trait when playing Heroes 2, staking up a horde of skeletons, vampire lords and bone dragons, casting death ripple after death ripple! Disciples ... undead as well, World of Warcraft... undead rogue, Diablo ... necromancer, and the list continues! 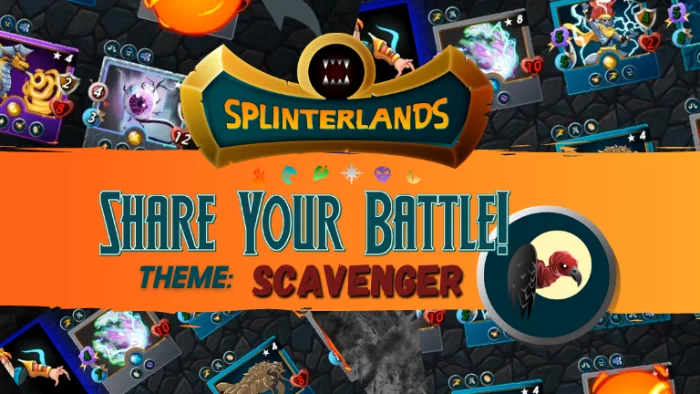 This was only the intro to the newest battle challenge... the Scavenger ability! What's your game plan? Are you going berserks and jump in the middle of the brawl while swinging your axe? Are you the one feasting on the fallen, making rune from their blood? Are you the scavenger that looks for a honorable death in battle? 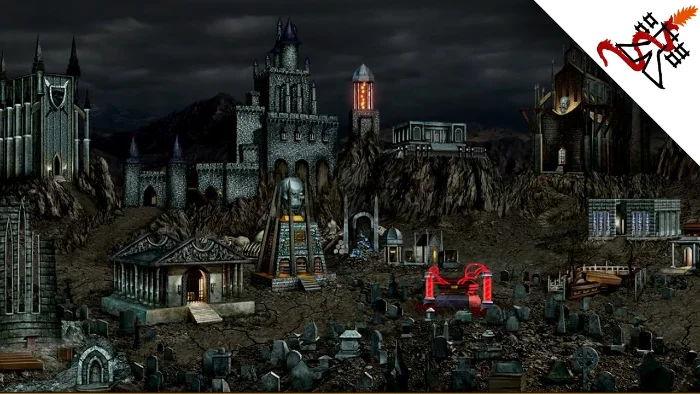 The Scavenger ability will add 1 Max Health to the monster any time another monster will die. There are 9 cards with Scavenger, some obtaining the ability when upgraded to higher levels. From those nine monsters, I have only the Ant Miner and the Gelatinous Cube!

Add a Cube for extra flavor!

The Gelatinous Cube is the perfect card to be used as main tank and shield heavy hitters with low health such as overpowered ranged monsters or casters. The Cube costs 6 Mana and has 8 Health Points. Maybe you don't know but the Gelatinous Cube can change color to camouflage from his enemies. 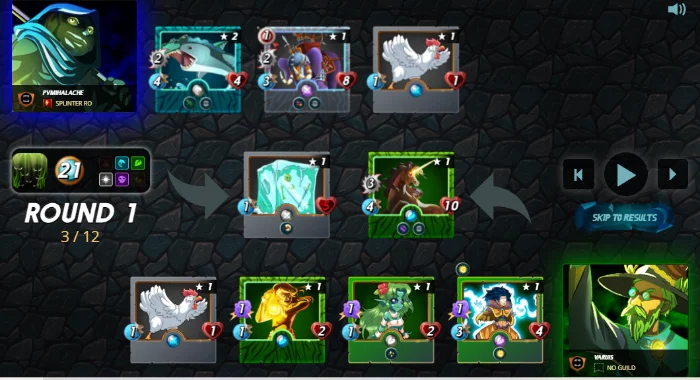 The opponent choose a strong tank, the Unicorn Mustang, and casters behind. Unfortunately for him, I was expecting casters and my choice of summoner was brilliant. As the chicken and other monsters were roasted, my Gelatinous Cube grew stronger. 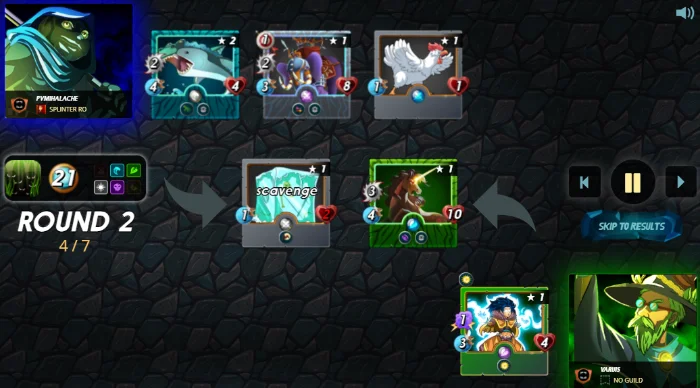 Monsters from both sides were defeated and the battle resumed to a 1 v 1 duel between the War Chaang and the Unicorn Mustang. The opponent had the stronger card but then it came the .... retaliation! I can say this was a good tactical game where the team selection and the extra health gathered through Scavenger made the difference. See the full battle here! 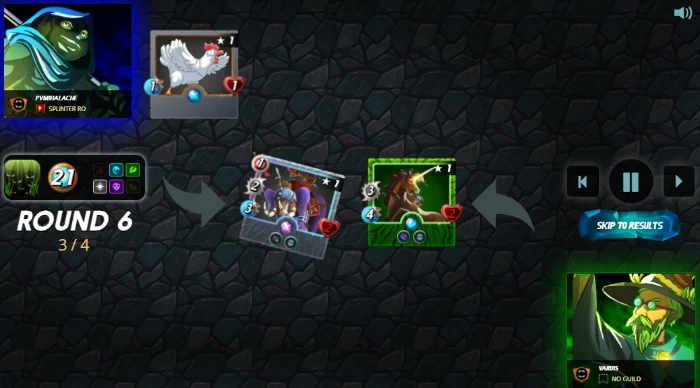 The Ant from Hell!

The Ant Miner is one of my favorite cards in the game because of the low mana cost. The monster has 1 Health Point, 1 Melee Damage, 1 Speed and the Scavenger ability for only 2 Mana. I use the Ant Miner in the 3rd position, after a strong tank and another monster with Reach, giving time to build up the health. 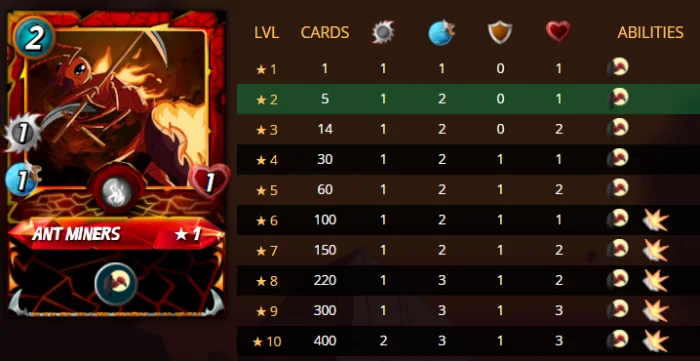 Battle Details and Line-up: Mana cap 13 with Lost Legendries ruleset, meaning no legendary monster can be used in the battle. 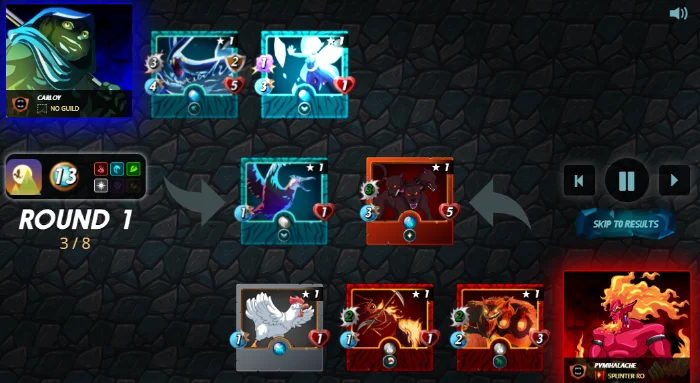 The enemy chosen Bortus but the summoner ability will have no effect on my team as no casters where selected. After the weaker monsters were defeated, was time for a K1 fight between the Serpent of Eld and the And Miner. At this point, I has hoping to land the blow and avoid a miss! 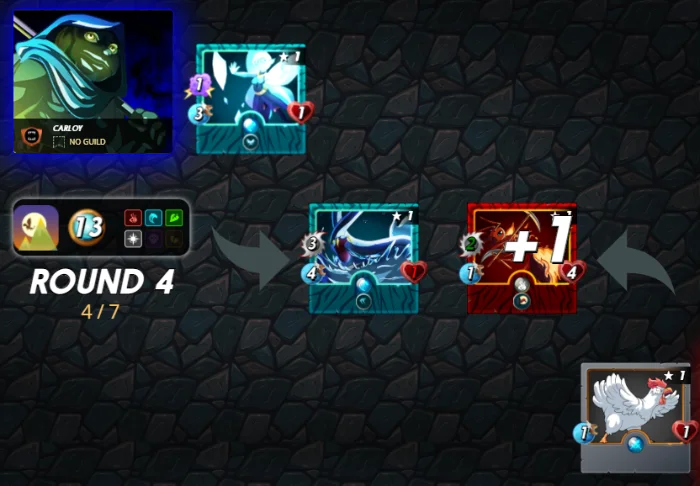 The Ant Miner delivered the fatal blow and then melted the Ice Pixie. This fight was won by the Scavenger ability and the summoner's ability. The extra Health Points and the extra Melee Damage created the winning combo. See the full battle here! 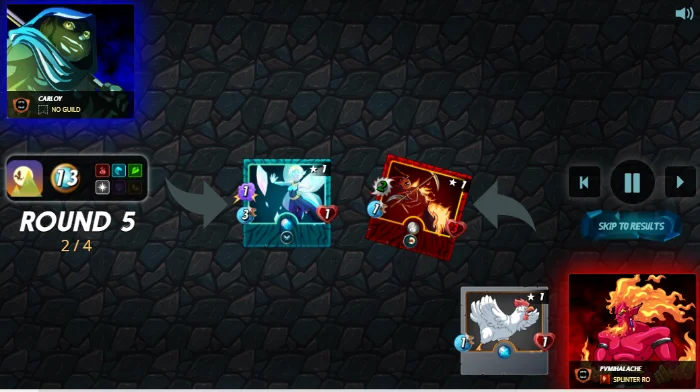 The Scavenger ability is a game changer in both short and long fights. Upgrading the monsters with Scavenger ability should be considered a long term investment as this cards can help a player advance through the rankings and earn better rewards. Surprisingly .... the chicken survived both fights! Scavenger Screeching Vulture is a great asset when it is leveled up. I have played with Ant miner too but more with Gelatinous.