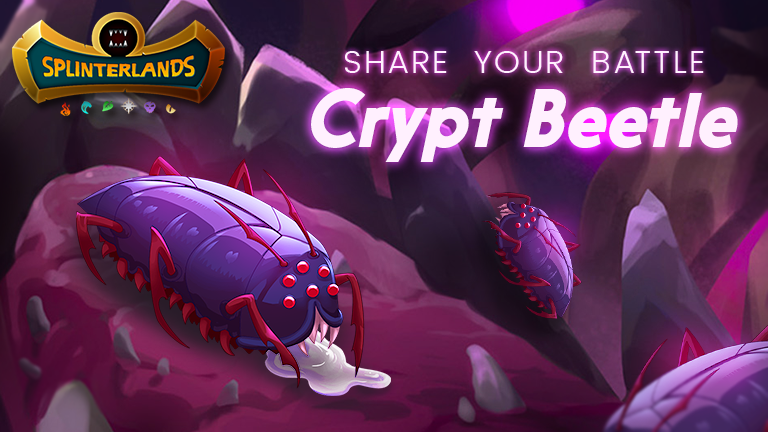 Hi everyone! It's time for the a weekly battle challenge, and the challenge for this week is the Crypt Beetle.

At level 1, the Crypt Beetle has only 2 Health and 1 Shield. As it levels up, it progressively gets higher Health and Shield, which is quite good for a low mana card. It also comes with the Shield ability from level 1. It is great for taking a few hits from Melee Monsters but not great as a main tank due to the low starting health.

It's not a Monster that I usually use, so mine's at level 1. But even with a level 1 card, I still wanted to have a go at the weekly challenge!

Equal Opportunity: All Monsters have the Opportunity ability
Rise of the Commons: Only Common and Rare Monsters may be used in battles
Only the Life, Death and Earth Splinters can be used
Mana Cap: 52 Summoner: Thaddius Brood - This reduces the health of the opponents deck and also reduces any magic attack damage.

The Line Up
vs

The strategy was to use the Crypt Beetle to take the initial damage. It having the lowest health means that it will be the first monster on my deck to take the hit. I thought my strategy worked quite well, as I managed to take out the opponent's Mycelic Slipspawn fairly, and the Goblin Psyhic after that. That removed the opponent's edge as his healing card was taken out early.

Thoughts on the card

I rarely use the Crypt Beetle as it is not great as a tank with its low health. However, there are some rulesets like Equal Opportunity where it can be a useful card to have.

Congratulations @arbalestarx7! You have completed the following achievement on the Hive blockchain and have been rewarded with new badge(s):

Your format is fine, however, you can offer more details about your battle and strategy, this will make your post much more interesting to others and you could add value with it.