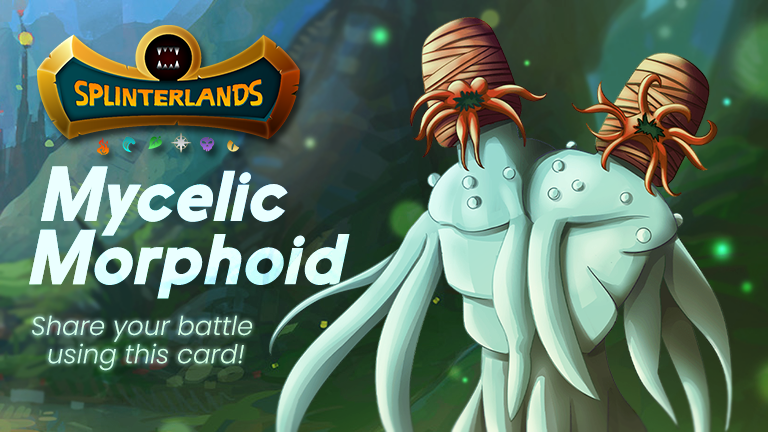 Hi everyone! It's time for the a weekly battle challenge, and the challenge this week is the Mycelic Morphoid.

Super Sneak: All Melee attack Monsters have the Sneak ability
Risk of the Commons: Only Common and Rare Monsters may be used in battles
Only the Life, Water, Death and Earth Splinters can be used
Mana Cap: 32 Summoner: Obsidian - This increases the Magic attack of my whole deck by 1.
The Line Up
vs

This strategy doesn’t take full advantage of the Super Sneak Ruleset, as only the last 2 cards can utilise it. However, the strategy here is to try to take out the tank fast and hit the weaker backline at the same time. Unfortunately, the opponent used the Shieldbearer in the first position, which meant that I had to take out the tank first! I think I was also lucky that the opponent’s card selection meant that he didn’t concentrate all the attacks on the tank first. I might have otherwise lost. The Mycelic Morphoid also did its job, by taking out the opponent’s Celestial Harpy with its Thorns.

Thoughts about the Card

I like the Mycelic Morphoid, but it's only good from level 3 onwards, as it has the Thorn ability. It is low cost card and can help to deal some damage to Melee attack Monsters if it’s strategically placed.

Electronic-terrorism, voice to skull and remote neural monitoring on Hive and Steem. You can ignore this, but your going to wish you didnt soon. This is happening whether you believe it or not. Many of the platforms for hive and steem are trying to silence me so they can do this to YOU. Please follow this link. The community isnt safe HERE if you cant click on this link. https://peakd.com/gangstalking/@acousticpulses/electronic-terrorism-and-gaslighting--if-you-downvote-this-post-you-are-part-of-the-problem ...OR THIS LINK... https://ecency.com/gangstalking/@acousticpulses/electronic-terrorism-and-gaslighting--if-you-downvote-this-post-you-are-part-of-the-problem

Congratulations @arbalestarx7! You have completed the following achievement on the Hive blockchain and have been rewarded with new badge(s):

@skuration 55
4 months ago
Thank you for sharing this great content, You have been manually Upvoted by @skylinebuds