My favorite splinter on splinterlands

@burlarj 74
about 2 months ago
The City of Neoxian

Happy sunday famz, it is the beginning of a new week, may it favor us, more writing ideas to the writers on the hive blockchain, i have been planning to write a splinterlands post for a while but i have been pre occupied with communities challenge post but i said i must not miss it today!...

My favorite splinter must definitely be the most brutal of all and which splinter can it be if not the dragon splinter? none can be compared with it and why is the dragon splinter unique and extra ordinary? one is because of their summoners.. They can be used to summon any of the other four splinters and secondly is the monsters too, they are well over powered and can cause havoc to a whole splinter if well chosen and placed...

So many dragon summoners, i know new players may not know some of this summoners though since they were the first set, i also have my favorites in this dragon summoners and my top 3 most used is byzantine kitty, selenia sky and camila sungazer..

I love byzantine kitty the most because of its amazing abilities, it never miss an attack and it gives two speed to monsters and we all know the victory of a battle depends on how fast this monsters are so speed is a necessity except it is a reverse rule battle..

There are so many dragon monsters that i can not show all their pictures but i am obsessed with some of them and i will share 2 that i often use in battles.... 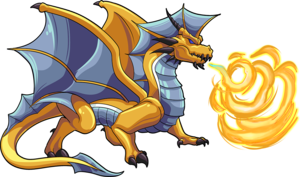 I was so obsessed with the gold dragon during my first year playing splinterlands, i won many battles but i always lost to top players because i keep using this monster in low mana battles, i use it in 15 mana battles along with lord arianthus when i could have used many 2 and 3 mana monsters, it was later i realized my mistakes and changed but it was fun while it last, i was so predictable back then, it is just as if the opponent knows what i was going to use and they always have the right monsters in check to counter the attacks!

I still use this monster now but not like before, i no longer use it blindly and only use it in battles where it really fit into! 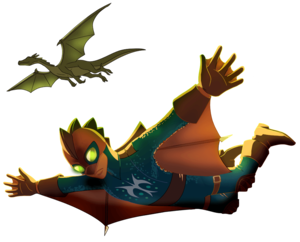 The dragon jumper have saved me countless times, in tournament he has won me many prizes and in leaderboard he has won me many trophies too by helping me to win battles, all thanks to its speed and stun ability, it rarely miss an opponent so never underestimate this card, i use it more now than the gold dragon,.. The gold dragon has a weakness and that is it being a magic monster and if the opponent use a magic reflect, it could be a disaster but the fact that the dragon jumper target the weakest monster is an advantage, call it an assassinator..

You can try to use this two monsters more in battle and you will realize the fun you have been missing not using them!

I am a professional gamer, motivational speaker and a crypto enthusiast

@indiaunited 61
about 2 months ago

Congratulations @burlarj! You have completed the following achievement on the Hive blockchain and have been rewarded with new badge(s):

hmmmm! those are the top splinters.

I like Dragon Jumper. I describe him as the king among opportunity monsters.

I missed writing for Splinterlands for I think two weeks now. I think the reason is I am still grasping for a worthy story to share. Just taking my time to take a rest waiting for some inspiration.

you can always share your battles that are awesome, players may learn from your tactics that way and yea i think the best opportunity monster on splinterlands is dragon jumper

I don't have a gold dragon but dragon jumper is amazing in fights. It's fast with the opportunity skill so it kills off monsters on my opponents side quick.

yea gold dragon belongs to the beta set, we all love this dragon jumper😃

Don't forget the fiendish harpy that is a boss dragon card for sure, especially when all monsters have same health...

oh yea the fiedish harpy used to be one of my favorite but after the release of untamed and dragon jumper, i use it less nowadays

I think the dragon sky diver is great. Thanks for sharing.