Its a solid moment for a post, was a slightly crazy nights at work but i made it out alive. Just in time to put in more work....to get some focus points to be able to claim a few reward chests in the new updated rewards system.

1st, wanted to jump in on the Venari Knifer challenge. I have always thought it was a cool looking character with interesting art. Looks especially badass when gold. After a few attempts i scored a win, but with the Venari Knifer in the 2nd position. Was a No Summoner battle modifier. Thought it might not get the win, but ended up being an interesting battle. Back from the future to catch up once again Boom.

A boom comment is like a stone unturned. Thanks again brotha. Things are balancing out, maybe not as bad as i thought but i did just miss a couple days of rewards. 1st missed days for like 7 months lol. I been on it like a machine, but the change is a bump in the road.

The change is a bump in the road. I am trying to get used to it myself and I don't even play no mores!

Being someone still on the fence, do you think the new rewards would feel less "bad" to struggle for if there wasn't just one focus you were locked into? I know that not everyone has a deep deck for each splinter.

that is really something one should pay attention to... not good!

Interesting point. The bosses most definitely pondered and i didnt listen in on what was said too much. They have their reasons im sure. Guess it makes us get more cards to be more balanced.

One of those cards that whomped me so many times i needed one. Splinterlands probs bro. Late response but i gotchu Joe. Keep grinding.

Ye... I do not know about the system either... more effort less payout...

Kinda what it seems Bullbro, it seems to have evened out for me, but seems to take more battles. If the chests have little better loot overall, than maybe less chests is ok. Hope youre good otherwise. Enjoy that sun in your area.

Thanks btw Luiz. Had to play catch up on my feed. Keep beastin brotha. My bots mostly dry, but ill see ya soon and i got you. 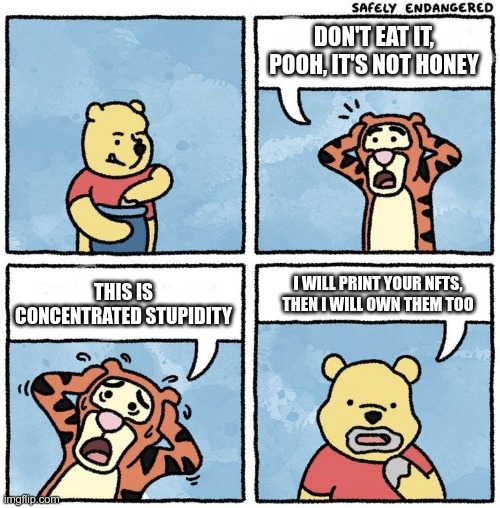 Nice battle, keep it up quackie.

Thanks bud, my duck feet keep tappin to the beat.


The first time I got a universal remote control I thought to myself
This changes everything.
Credit: marshmellowman
@screamheart, I sent you an $LOLZ on behalf of @captainquack22
Use the !LOL or !LOLZ command to share a joke and an $LOLZ
(5/6)
0
0
0.000
Reply

Would you mind teaching me this game also

The game is little tough to figure out dear. Also requires time and some investment too i hate to say. Think its 10 dollars to start but requires renting cards, or buying which gets expensive. Might be some streams on youtube that show how the game works. Its a card game. 6 cards for each player. There are battle rules. Took a while for most of us to figure out im sure. Up to you if that interests you. I bought too many cards like a madman and prices are down, so i have been dragged down some as well. Keep rockin though.

Alright then.. I think I better give it some time then.

If youre there sgt Dan, thanks buddy.

After a few days of getting used to it, I think the new reward system is still OK, I can reach the original reward level, and even get more.
!PGM
!LUV 
I hear Sasquatch makes bowls out of clay
He's a hairy potter
Credit: reddit
@brianhuang, I sent you an $LOLZ on behalf of @captainquack22
Use the !LOL or !LOLZ command to share a joke and an $LOLZ
(2/6)
0
0
0.000
Reply

I've been trying my hand at splinterlands again, i gotta say I'm digging the new changes hopefully its helped cut a tonne of bots out of the game? at least them reaping rewards that is..


An atom walks into a bar and says I think I lost an electron in here
Bartender: Are you positive?
Credit: theabsolute
@captainquack22, I sent you an $LOLZ on behalf of @dubble
Release your inner Rock Star with Rising Star! The best #play2earn game on Hive! Play for Free!
(9/10)
0
0
0.000
Reply

Yeah bro, less bots might be good to abuse less. Was reading good posts, but i think we are stuck with some bots regardless. Up to you bro, only so much time in our day, battles take a bit of time. Im trying to moderate.


Ever seen a blacksmith join two metal sheets?
It's riveting
Credit: reddit
@dubble, I sent you an $LOLZ on behalf of @captainquack22
Farm LOLZ tokens when you Delegate Hive or Hive Tokens.
(1/6)
0
0
0.000
Reply

Didn't think too highly of the new system initially but somehow it has worked out fine for me. Am playing in Silver league for Silver chests so have been accumulating chests at a reasonable speed. Unfortunately Silver chest rewards aren't fantastic so hopefully the quantity can make up for the lack of quality hehe!
!PIZZA

Definitely Relf, not sure how i feel still, but is what it is. We gonna keep battling like monsters.