The Easiest (And Cheapest) Deck to Get To Silver League

After reading the comments on my first Splinterlands post the other day, I thought that it would be worth it to put together another post discussing a single deck in more depth. I know that a lot of people (including myself) are struggling at the lower leagues so I wanted to put together a list of cards that will help others climb out of bronze with relative ease.

While Splinterlands is a great game, there is no denying that money talks. It's very easy to get out of bronze league based simply on your cards - there is very little strategy required. As I mentioned in my first post, Mylor Crowling can single-handedly get any player to silver league. While strategy begins to become a lot more important later on, cards are the single most important factor in the lower leagues.

With that being said, today I want to introduce a deck that uses fire that will help you easily climb the (lower) ranks and get those sweet silver league rewards! Let's get into it. 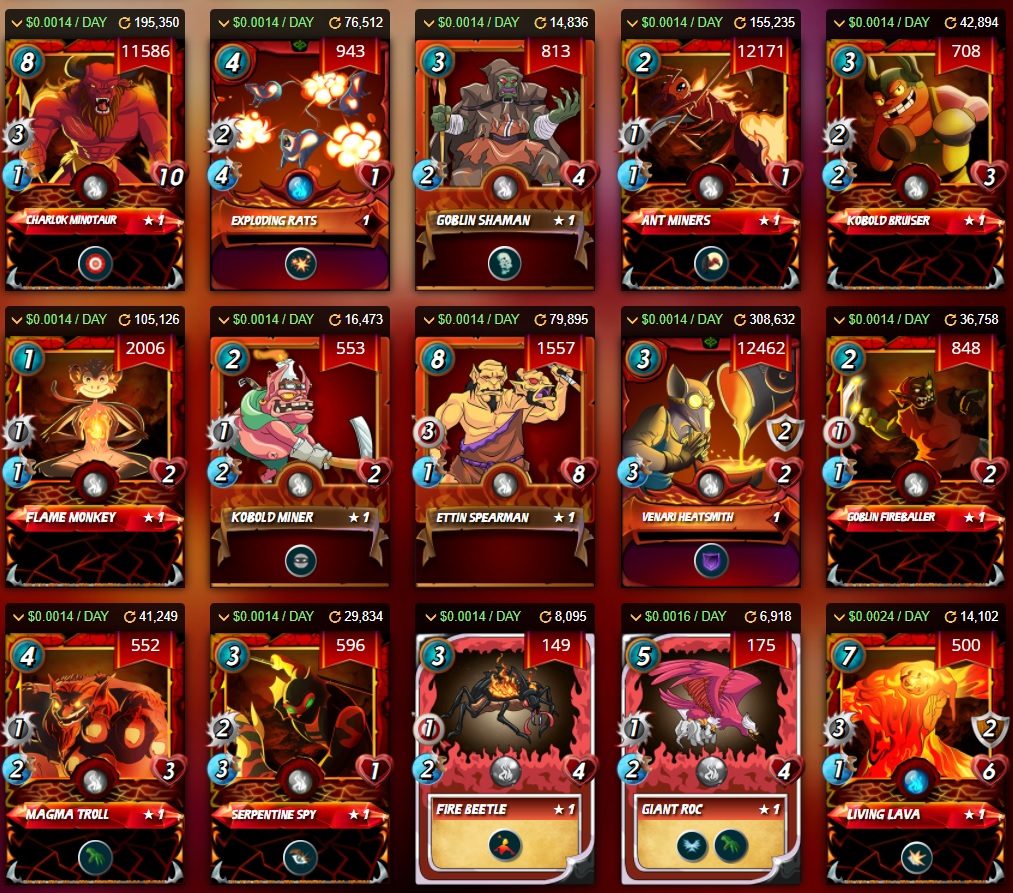 Fire has lots of strong yet affordable cards!

So, why did I choose a fire summoner rather than any of the other elements? Well, truth be told, I believe that water (magic-based) is the easiest way to get to silver. Seriously, you can get to silver without losing a single game in bronze. However, the ideal magic deck costs around 300 DEC per day and this will be more than some people are able to or willing to spend.

After water, I think that nature is the easiest to progress to silver. However, while nature is cheaper than water, it's still quite pricey to create a decent dec(k) with. Further, I would argue that you need to rent/purchase more cards to unlock the full potential of the deck.

Life, death and dragon I chose to discuss another time as both life and death are more expensive than fire (dragon is much more expensive). On top of this, especially in the case of life and dragon, I would argue that the decks are actually harder to grasp fully and to understand the intricacies of.

Therefore, I chose to discuss a fire deck because it's not only the cheapest and most accessible, but also because it's the most understandable and easy to familiarise new players with.

You Only Need Fire

This is also worth mentioning. In bronze, you can ALWAYS play any deck that you want. The only restriction is mana. Once you hit silver you will start to have games that only allow certain elements and which introduce other modifiers. However, in bronze this is not an issue - within the mana restrictions, you can always play what you want.

While there are some natural counters to this deck, you should, at most, be encountering them only 1/4 games or less. In order to save DEC, I don't recommend building a second deck until later. Rather, bring out the fire deck even when you know you will be hard countered. A 75% win rate is pretty great - you'll still get to silver in no time! So, what exactly are the counters...?

With all of this talk about counters, what are the actual counters? Well, let's have a look. 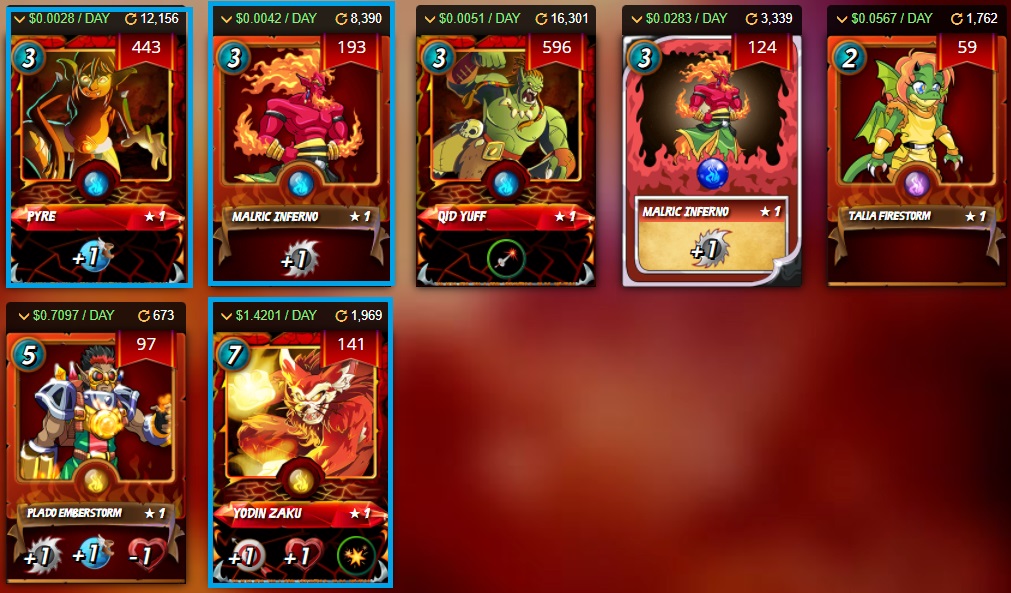 The three summoners you will want!

Let's get into the main part of this article now. To begin building a deck, we need to pick some summoners. However, there are a few choices! Let me explain when and where each summoner is a good choice.

The two basic summoners that you will get along with the Spellbook are Malric Inferno and Pyre. Malric gives +1 melee attack and Pyre gives +1 speed. Both of these summoners have their place and this is when I would recommend playing them:

Malric - Use this summoner in pretty much every other situation. I'd say that any game over 19 mana is better fought by Malric.

If you can afford to spend a bit more DEC then you might want to consider renting Yodin Zaku. This summoner is currently about 120 DEC per day to rent, but it can quickly earn that amount back provided you play a few games. This 7 mana hero gives all units on your team +1 ranged attack, +1 HP, and, most importantly, blast. This ability means that every enemy unit that your units hit will also apply 1 damage to both units adjacent to it. This ability is crazy strong at lower levels.

Yodin Zaku - If you can afford this summoner, use him in all high mana games. Using him in games with lower than 29 mana is questionable, but any game above that will allow him to show his true strength. Similar to Mylor, this summoner can singlehandedly win games.

Okay! Finally the fun part. Again, I assume that every person reading this has the Summoner's Spellbook. If you don't, that should be your first priority. Purchase that before anything else! I won't discuss the cards that come with the spellbook because I want to keep this article at a reasonable length. However, they should be mixed and matched along with the cards that I will mention below.

Also worth mentioning is that almost all of these cards are high mana cards. Fire is already very solid in low mana fights with the basic cards. Kobold Miner, Serpentine Spy, Spark Pixies and Cerberus are very solid choices for lower mana games.

Lava Launcher - This card is actually quite affordable to buy at less than $3 currently. For that price, it's one of the most useful cards in the game. With an attack of 3 (ranged) and the ability to fire from any position, this card is incredibly good. It's also a great tank (get it?) with 6 armour and 5 HP. This card is best used in high mana battles when you can afford to drop 9 mana on a single card. For lower mana battles, it's best to play other cards.

Flamesmith - This ranged card is another high mana card that is also quite affordable at less than $1. This card costs 7 mana and comes with 2 ranged attack, 1 armour and 4 HP. Most importantly, it also has shatter which will instantly break the armour of whatever unit it attacks. This is incredibly useful against decks that rely on high-armour tanks, usually light, water and death. Fire and nature decks tend to rely more on HP tanks and therefore Flamesmith isn't as useful against them.

Efreet Elder - This card is a lot of fun. Currently selling for under $2, it comes with 8 HP and 1 magic attack. All of this only costs 6 mana! However, the best bit is the ability 'last stand' which allows this card to gain a massive stat boost if it's the last card on your team alive. This card is best played in the mid-end of your deck but NOT in the last position. If placed in the last position, it will likely be targeted by opposing units with sneak. Since you want this card to survive, it's best placed in a position or two forward from the back.

Fineas Rage - This card comes with 8HP and 2 attack along with reach. This ability means that Fineas can perform melee attacks even when he is in the second position. This is fantastic when matched with Malric (+1 melee damage) as it allows Fineas to get some fantastic hits off. Even better, once your frontline tank dies, Fineas has enough HP to withstand a turn before the opponent gets to your squishy cards.

Pyromancer - Pyromancer is a rather basic ranged attack card except that it also has the blast ability. This ability, as I already explained under the entry on Yodin Zaku, will deal 1 damage to all enemies adjacent to the target enemy. This is fantastic for clearing out low HP backliners on the opposing team. Of course, if you are running Yodin as your hero, this ability is pointless and you're better of running another ranged card. However, if you are using Malric or Pyre, this card is a great choice.

Caladuum - The price of this card might throw a lot of people off. However, the rental fees are actually very reasonable - currently, it can be found for 10 DEC per day! More commonly it will cost about 25 though. Caladuum is a fantastic card. With a mana cost of 11, attack of 3 (magic), armour of 3 and HP of 10, it can be put in any position. It's an extremely solid attacker and a decent tank - especially against water summoners as the card has void meaning that it takes -1 damage from magic. This card is best used in high mana battles or when going up against water summoners.

Sand Worm - This list can't exist without Sand Worm! This neutral card is very cheap and has an incredible 5 melee damage with sneak. This means it is fantastic for dominating the opponent's backline. The only downside to the card is the speed. 1 speed means that it will almost always attack last. Of course, if you can keep it alive for a few turns it quickly pays off. This card matches fantastically with Malric who will give it +1 damage and Yodin who will make sure that the adjacent backline card also takes 1 damage every attack.

Magnor - Another card that goes for around 20 DEC per day, this tank is the best that fire summoners get. With 4 melee damage, 13 HP and taunt, all opposing cards will be forced to attack Magnor if possible. The biggest downside is simply the 10 mana cost. However, if you get a game that allows 29+ mana, Magnor can easily carry your team to victory. In very high mana games, I often put Magnor in the 3rd or 4th position as this splits the enemy damage between him and my tank, allowing my frontline to deal heavy damage.

Playing Yodin? If you do rent Yodin and choose to play him, also consider renting Pyromaniac, Fire Demon, Ferexia General and Imp Bowman. Since you get +1 ranged attack and blast, these ranged cards will complement the deck very well. Further, they are all quite low mana cost and easy to play!

I hope that you found this post helpful and I look forward to hearing how much this deck can help other people. It's helped me get to 1600 in silver and the only difficulties I've encountered are when the deck is hard-countered or when fire/melee cards are banned. However, this will not be an issue in bronze and therefore the deck should be very solid!

In last blog I suggest to add card prices not rental prices. If I want to buy any card if better to see if I can afford it just from your blog. !PIZZA

Sure, I will include that in the future! I was confused as to what you meant, but I understand now :)

I will be curious to read your blogs

Yay! 🤗
Your content has been boosted with Ecency Points, by @devi1714.
Use Ecency daily to boost your growth on platform!

With the CL release on 18-Ocy, I think there is some change in the meta.
I'm waiting to see if this meta still can help in Silver league :)

Awesome write up on helping others get out of bronze and into earning better rewards.