Background by Jong Marshes on Unsplash
Cover edited in Canva.

Having two monsters to serve as your tank is probably the best. Unless you have a ridiculous tank, then two tank set up is better as you have a back up plan in case the first one dies. Here comes Flying Squid. With the release of Chaos Legion, monsters like this is perfect for the job. Not only he can serve as a secondary tank but Flying Squid can also attack from the back line, due to his reach ability, while waiting for his turn to be the main defense of the team. This is really an interesting monster and is also good for beginners and players just getting into the game.

Although Flying Squid are not truly capable of flight, their moniker comes from their ability to launch themselves from the water and glide above the surface for long distances before resubmerging. These aggressive predators shoot ink into the eyes of their prey to blind them before attacking with their lengthy tentacles.
The Chaos Legion captain stood at the helm of the ship, gazing out at the empty sea. The sky was an overcast gray, and a brisk breeze ruffled his hair. A large flock of seagulls skimmed the surface of the water, flying ever closer.

He squinted his eyes. The birds drew nearer. As they did, he saw they weren't gulls at all. They were white, yes, but instead of wings and feathers, they had smooth, sheeny skin and tentacles that waved through the air.

From high above in the ship's crow's nest came the cry of alarm. “Flying Squid, twelve o'clock!”

The crew sprang into action, but it was already too late. Before most could reach for their weapons, the squid were upon them. The creatures fired sprays of ink, blinding the men and women below. Those that were able to take up arms flailed uselessly at the creatures, who stayed just out of each, striking with their long and muscular tentacles.

The captain drew his saber and swung at a squid as it whizzed at his head. He missed, and it shot a stream of ink into his face. His eyes burned, and the blinded captain wiped at them futilely.

A tentacle wrapped around his ankle. Another encircled his wrist. He struggled, but his other ankle and wrist were soon grabbed by more tentacles.

They began to pull him apart and, oh, how he screamed. 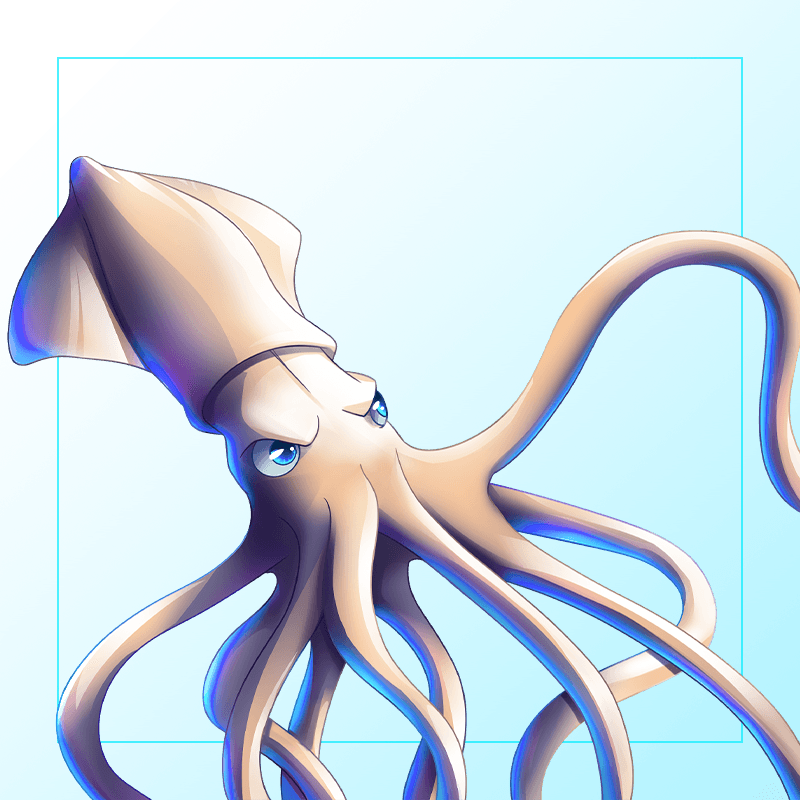 Max level Flying Squid for only $25.43 is currently on sale now. You get bonus stats but also, bonus abilities.

However, if he's not within your budget, a level 1 can be obtained for only $0.064. I suggest getting one of each cheapest ones so you have these emergency cards when your key cards are unavailable. Using starter cards reduces your rewards so you may think about collecting these affordable cards that you can use anytime. Renting just made sense for me. Before, you just rent so you have power for ranking up. Now, it's commonly used as well to reduce the reward penalties if you're using starter cards from your spellbook purchase.

Flying Squid is a cheap substitute and you may even find something outrageous like this 0.13 and 0.14 DEC per day for a level 4 giving you more stats.

Remember, even if you have level 4 or any higher than level 1 monster but only a level 1 summoner, your monster will be capped at level 1 during that battle. 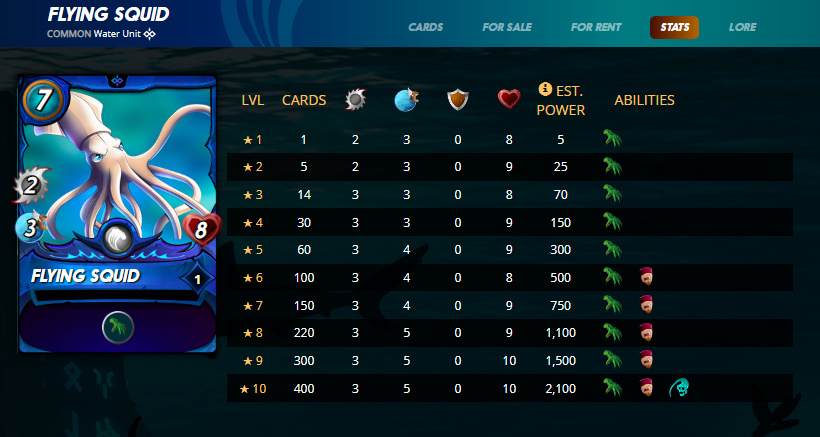 Flying Squid's stats is quite high alongside his high mana cost. He may not have high damage but the health is on par with a regular tank. With the reach ability, this makes him a very good monster to put second. This card reminds me of Finneas Rage, that fire monster with also high health, damage and reach ability.

At level 6, Blind is unlocked. Monster with the Blind ability has a chance of inflicting the Blind effect to opponent. Blinded opponents had their attack chance reduced by 15% when attacking another. This effect does not affect magic damage opponents as they magic damage types do not miss their attacks regardless of their speed or abilities involving hit and miss chances. 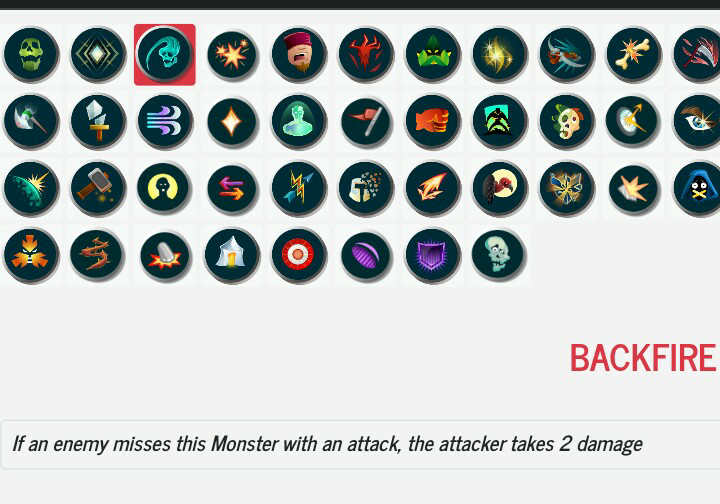 At level 10, Backfire is unlocked. Backfire is an interesting ability as it is like thorns ability but for all damage types and a different condition. With Thorns, your melee opponent must hit you in order for it to activate while with Backfire, your opponent must miss. However, for Backfire, all magic types can be activate it as long as it misses. That means, it activates for both melee and range attacks but for magic damage, you must have a certain ability that allows you to make it miss for it to activate.

26 Mana Cap. Total mana cost of monsters must not exceed 26.

Noxious Fumes. All monsters get the Poisoned effect. Poisoned monsters take 2 damage at the start of every round. Poison from Noxious Fumes cannot be cleansed.

All Elements Unlocked. You can use elements of your choosing. Any elements are available.

Do you like FLYING SQUID? Why or Why not?

A bit. I don't have particular fondness with Giant Squid because I don't use him a lot in games. He is strong, yes, but my normal strategy doesn't coincide with him making him not so useful in my squad. However, I don't particularly dislike him either. As I said, the card is strong. His high health can be on par with a regular tank making him ideal as a second line of defense. Use him on high mana fights as Giant Squid requires quite a bit of mana cost to use.

Summoner: Kelya Frendul: Gives 1 speed and 1 armor to all ally monsters. If you're not afraid that opponent will use Earth element or magic damage, Kelya is a good overall summoner for Water.

This is my old lineup when Chaos Legion started. I call this the Newbie Line Up. It's a solid line up composed of Kelya Frendul, Diemonshark, Giant Squid and Deeplurker. Good for starting players.

Yes. Since there's Noxious Fumes this game which give poisoned effect to everyone, my strategy for this game is using a lot of high health monsters to counter the poisoned effect. Instead of uing a lot of little ones, it's better to choose a few big one which allows you to survive more turns than your opponent.

I don't use this line up anymore and prefer Kraken. However, for thi battle, I won't change anything. As I mentioned, this is already a solid starter line up and no changes are needed.

That helps me a lot grow my ongoing collection.

Congrats and good luck on your battles. 💪

Thank you. Games are getting hard lately. I don't know why.

You're welcome !LADY ❤ It seems there had been updates with the game.