Background Photo by Minha Baek on Unsplash
Edited in Canva.

I saw this before in youtube as a counter to that rule of combat that gives all monsters poison effect. I haven't encountered that yet but I do understand why. The more I look at this card, the better my sense of how good it is and I think you will agree to me at the very end. 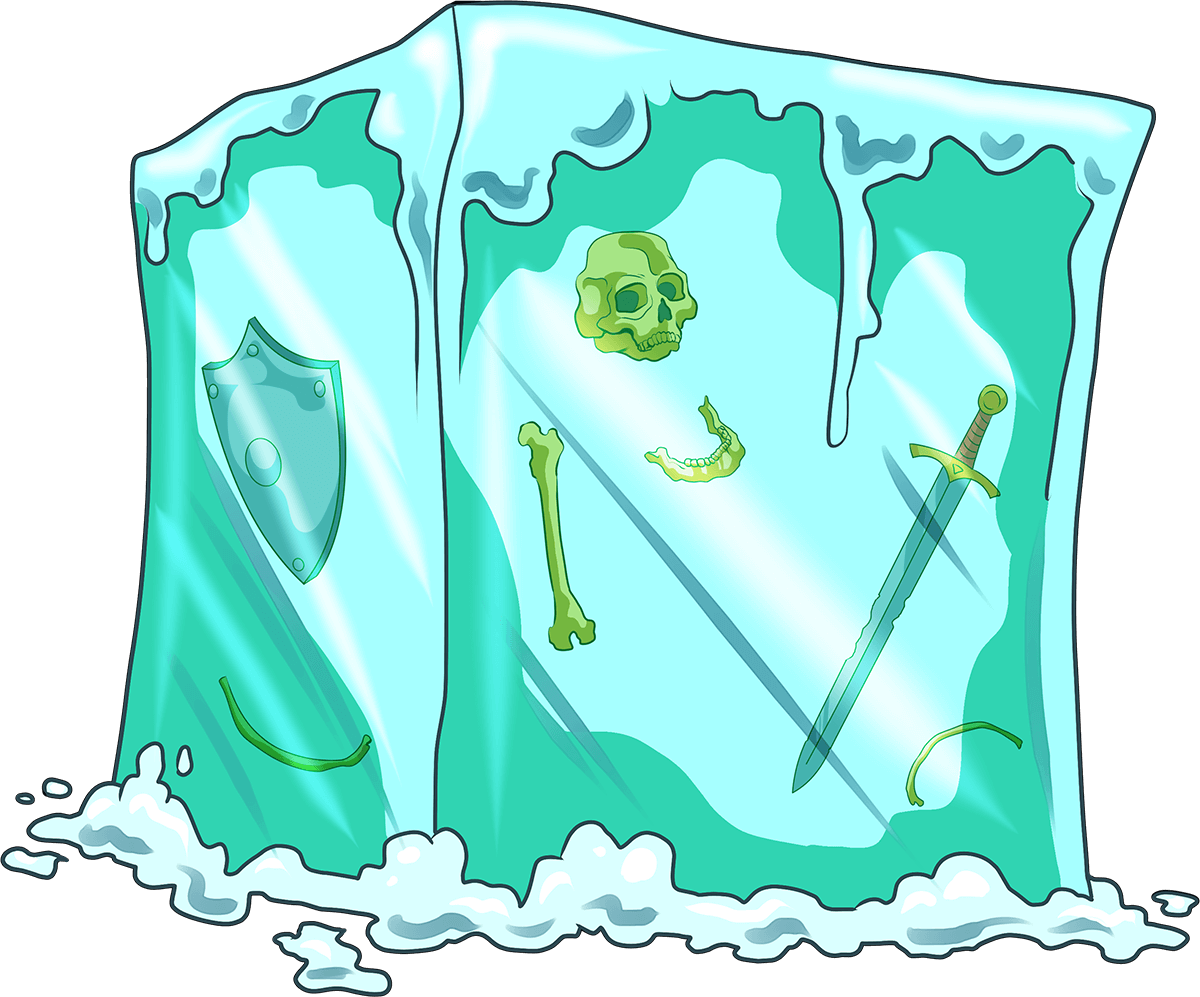 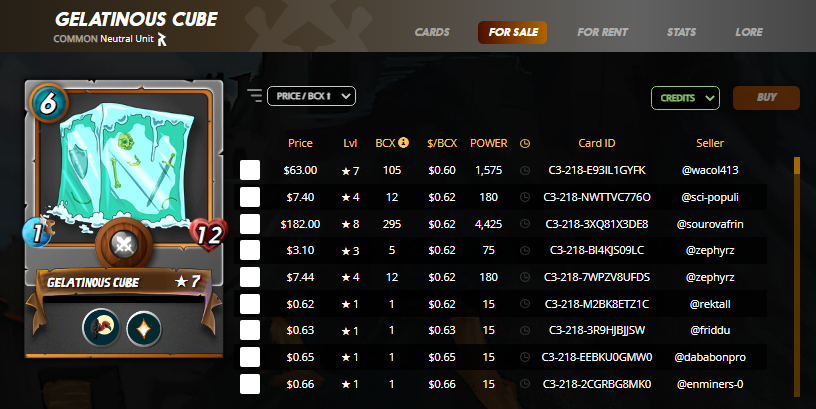 You can get one for less than a dollar. It's really affordable and if you want a higher level for more health, you can get a few offers for less than $10. It's a good reserve for specialized rule sets as the Scavenger ability is really strong on certain rules of combat.

Gelatinous Cube is affordable to rent. You can rent a level 1 for 0.10 DEC per day or rent a higher level with higher health for an extra 0.04 DEC per day. If you have extra rental funds, it's a good and efficient rent as Gelatinous Cube can win you games, alone, even without a damage type by simply standing in a Noxious Fumes Rules of Combat. 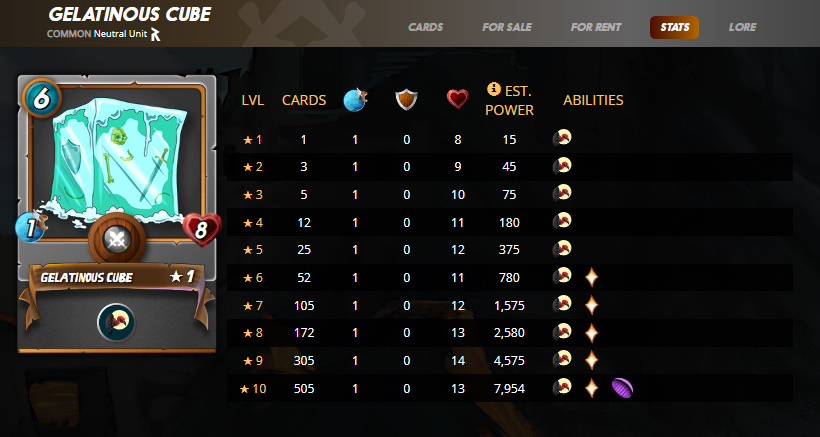 There's nothing special about this card. Actually, there's not much to discuss because he doesn't have damage and armor. Gelatinous cube also only has 1 speed making him susceptible to any attacks. the only thing making this card strong, and I do think it is pretty strong, is his health to mana cost ratio. For a 6 mana cost, initially, he has already 8 health and this increases per level with maxed out at 14 health on level 9.

One thing I remember and I want to mention is this might be good in matches right now since Cursed Windeku has an accessible Thorns ability. Since Gelatinous Cube does not have any way to attack, he also will not take any Thorns damage at any point in the game.

At level 1, Scavenger is unlocked. Scavenger gives 1 max health for every monster that dies in battle. This is very useful for not only prolonging your tank's life but also increases the effect of heal and tank heal over time.

At level 6, Heal is unlocked. Heal ability restores the health of the monster with the ability by 1/3 of his max health, rounded down. This means if the monster has 11 health, he heals for 3 per round (11/3 = 3.66, rounded down is 3) but 4 per health starting at 12 max health.

At max level of 10, Void is unlocked. Void ability halves all magic damage to the monster. If the damage is already 1, it negates the damage to 0. This is a good bonus ability for Gelatinous Cube but given that he heals for like 7 health or something during the round, this might not be as useful as it sounds as you can outheal the damage done by your opponent.

Holy Protection. All monsters get the Divine Shield ability at the start of battle. Divine Shield ignores the first instance of damage in the game.

Fire, Water, Dragon Elements Locked. Earth, Life and Death are all available to use. The other 3 elements cannot be used in this battle.

Everybody gains Divine Shield from Rules of Combat,Holy Protection.

Do you like GELATINOUS CUBE? Why or Why not?

Yes, I like Gelatinous Cube except for the art. (But that's personal preference.) So, I think Gelatinous Cube's art is outdated given that he wa released a long ago. It might be a lot better with the recent technology along with how good the younger artists are now.

Going to the main card, I think this is a very strong card overall. The Scavenger and high health can be used in the poison rule set and can even take out your opponents with him alone given he has a pseudo heal by the form of Scavenger. After unlocking Heal, he's a really hard to kill monster unless you drafted someone with Affliction. Other than that, good luck taking on this card while taking damage from the back row.

What makes this card better is that I talked about his health a lot but never mentioned that he only has 6 mana. The Kraken, the monster with the highest health so far, has 14 health at 12 mana cost. You can get the same health at half the mana cost so for that, he is a very strong monster for me.

Summoner: Thaddeus Brood: gives -1 health and -1 magic damage to all enemies. Thaddeus Brood and Gelatinous Cube is very compatible as the -1 health allows you to kill opponents quicker allowing you to get the scavenger ability faster.

Yes, but less effective than what I expected. With Thaddeus Brood's -1 health to all opponents, it only took 1-2 damage to kill the back row after removing the Divine Shield ability.

The original strategy I want to use is having a bunch of monster with Weaken ability and Thaddeus Brood providing support to Gelatinous Cube's Scavenger Ability. Weaken decreases all enemy's health by 1. Enemies with 1 health before the effect is applied is unaffected. This effect also stacks.

That means, if I have 2 monsters with Weaken ability and Thaddeus Brood as my summoner, all my opponent's monster gets -3 health. Then, my snipe monsters can just literally one hit them allowing my Gelatinous Cube to absorb monsters as they try to kill the last remaining monster.

However, this strategy worked as well and I am happy with that.

Thank you 😊 for your post. Some months ago I started to play splinterlands but I don't understand it completely. I'm thinking in return to play

With the release of Chaos Legion, it really became complicated. Practice and you'll get it eventually.

Also, starting next week, I'll be posting other Splinterlands related content like dividers, banners, and if you're also streaming in twitch, emotes such as this:

The emotes and other assets would be for free so I hope you check out my next week's post.

Excellent.. thank you. I will do it

It always amaze me to see how everyone plays the game. I feel left out, lol! Anyway, congrats on your achievements on the game. Have fun :)

Thank you for the continuous support.

Also, starting next week, I'll be posting other splinterlands related content like dividers, banners, and if you're also streaming in twitch, emotes such as this:

The emotes and other assets would be for free so I hope you check out my next week's post.

You're very welcome :) Would be reading then :) I don't do twitch yet, I can't seem to manage my time, !LOL

Thank you for sharing your battle! Take care and enjoy!

@konaqua 66
3 months ago
You're welcome and thank you for dropping by.