Due to the recent changes in the reward system, having ownership of 1 mana cost monsters is really good. Not only they're cheap but can also balance out the penalties if you're using the starter cards. However, not only a good filler, this card can withstand damage even if he's only a 1 mana cost and your opponent may come to annoy once you regularly use this strange monster.

To the untrained eye a Hardy Stonefish is nearly invisible when at rest on the ocean floor. This solitary creature is at home in deep water or in shallow pools. Their thick rough scales make the stonefish indistinguishable from chunks of coral or a large boulder but when they attack, very few survive. They can grow up to six feet in length and are wide and strong. Hardy Stonefish attack by slamming their rock-like skulls into their opponent, dealing crushing damage. Anyone who tries to battle this dread aquatic beast will find themselves surprised by the toughness of their scales, making their armor difficult to penetrate.

Sarl Mudfoot had been hunting the Irontail and Stonefin, prized for their scales, for months, but when he came upon the silt trail of a Hardy Stonefish he couldn't believe his luck. He dropped another air cartridge into his rebreather, bated his trap with a piece of quartz the size of his fist and perched himself on a boulder nearby. It was all over in a flash. Later that day his gear could be seen floating near the water's edge, his boat abandoned. 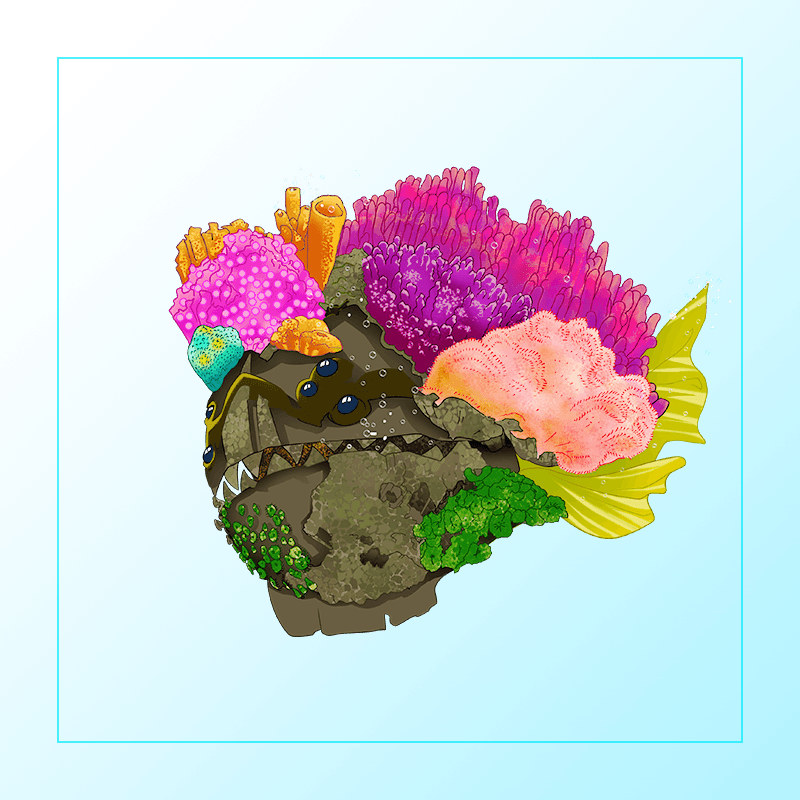 The regular one is only for less than $0.10. It doesn't give you anything except for a small tank and reduction on that reward penalty for using starter cards. So, instead, I suggest getting the gold one.

There's an affordable one, a level 4 Gold Foil for $0.94 but the average gold price is $0.55. It reduces the penalty and gives you a 10% bonus focus points for the daily and season rewards. It's a better buy for a filler card.

Rental price is 0.14 DEC per day for the normal ones. Again, better to rent the gold one for the advantages I stated above especially since you can use it in almost all the water element battles you have being a 1 mana cost card. 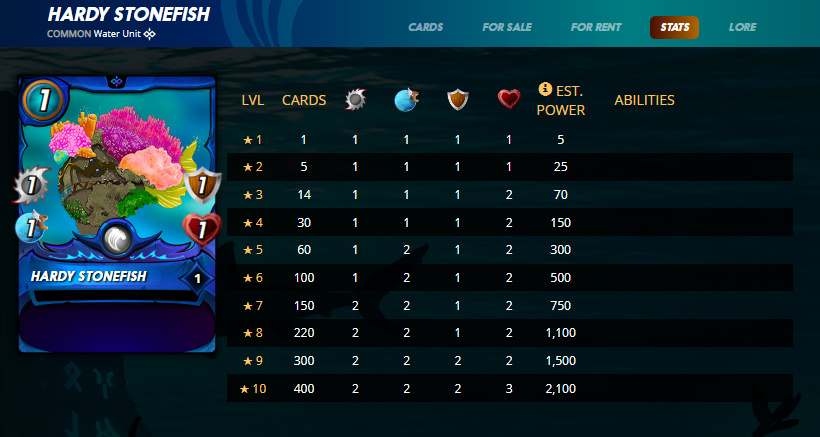 As expected, the stats of Hardy Stonefish is low. I would even come out and say that he is not even worth leveling up. However, he is worth getting your hands on to. What makes this card different than others is his 1 armor. Armor serves as secondary health. As long as he's not hit by a magic damage or Piercing ability, your opponent has no other choice but to attack Hardy Stonefish twice to kill him making him a reliable emergency front or back protection.

None. This monster has no abilities regardless of levels.

13 Mana Cap. This is a low mana cap battle. Total mana cost of all monsters in battle should not exceed 13.

Dragon Unavailable. Every element is available to use except for Dragons.

RED
monsters are my opponent.

When Sneak and opportunity monsters goes to 1st position, the ability is disabled and they would target the opponent in the 1st position instead.

Do you like HARDY STONEFISH? Why or Why not?

Yes, a lot. As mentioned, adding him in the battle can be a game changer because of his extra armor. In addition to this, Hardy Stonefish also increases your rewards per game by balancing out the penalties. It's cost is really low as of the moment as well so any player should have no problem getting their hands on one. This is a must card for water mains like me.

Summoner: Kelya Frendul: A good overall summoner especially on low mana matches. Gives you 1 extra speed and 1 extra armor. This is very effective especially if you use a lot of low mana monsters as tank.

Yes. The strategy is to have a lot of 0-2 mana cost monsters which would cushion the damage and serve as the front line. They are furthermore enhanced by Venari Spellsmith's Protect ability giving them 2 armor each. The more monsters in the front, the more 2 additional armor will be in your team.

It worked like a charm as I even were able to deal with Tenyii Striker before he reaches Venari Spellsmith.

Adding one or two 0 mana cost cards would work like a charm. I wasn't able to because they are expensive to buy and I only use this on low mana cap battles. I don't think getting a couple of 0 costs cards are efficient in my wallet so I am sticking up with this lineup for now.