The shy RIVER NYMPH and her adventures with Amplify! I hope all of you are doing well in your life while enjoying this awesome game in your leisure time. The time seems to run fast as even if it feels that the season has just ended in reality we already have come to the middle of this current one with only 8 days left for this season to end. I am still playing casual and right now battling in diamond two tier and will try to reach the diamond one tier tonight. The DEC payout Per ranked match win in diamond II is very less now, as I am only getting about 16 to 19 DEC per ranked match win. on the other hand, the price of DEC is also falling down continuously and I think it may touch its floor price soon. But the low DEC payout from ranked match win for long period of time may create a demand in market later on - causing the DEC Price to catch an uptrend again. 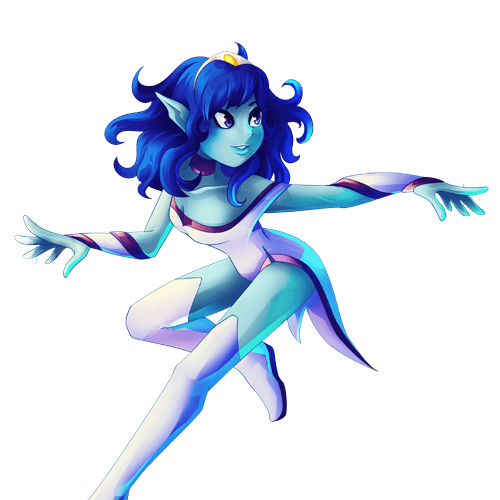 No let us take a U-turn from the market Road and rush towards the Royal battle ground of splinter lands because today I am going to showcase another awesome Chaos monster with you all, And this time I have chosen the new water monster that is creating waves nowadays, RIVER NYMPH!

As their name goes, the river nymph lives in the rivers of Splinterlands. generally, they are shy and prefer to be hidden beneath the water. But they respect life itself strongly and try to help anyone who is wounded and in need of aid.

The river nymph is rare type chaos card that belongs to the water region. it costs four mana to use in the battlefield and it’s attack type is magic. let us now learn more about this monster tier wise in below.

At level four, this monster gets one magic attack at three speed with three health and also gets another ability - amplify. because of the amplify ability, this monster will now increase the damage causing from thorns, magic reflect and Return fire ability to all enemy monsters.

At level eight, this monster gets two magic attack at three speed with four health and also gets another ability - Swift. because of the swift ability, now every friendly monster will get +1 speed. I used the Lord Arihanthus At the first place of my line-up mainly because of its defensive abilities that I will combo with the river Nymph’s amplify ability. I am using a level four in here and it has one speed with nine health along with four abilities - shield, void, magic reflect and Thorns. I use the prismatic energy at the second place of My lineup mainly because of its magic reflect ability, which will serve the same purpose with the river nymph’s amplify ability. I am using a level eight in here and it has three magic attack at five speed with 11 health along with two abilities - magic reflect and void. I use the Elven Mystic at the third position of my line-up mainly because of its silence ability which will reduce all my enemy magic monsters attacks. I am using a level eight in here and it has two magic attack at four speed with five health along with two abilities - silence and affliction.

I chose the River Nymph at the fourth position of my lineup mainly because of its cleanse and amplify ability. the amplifier ability will amplify the damage from my Lord and prismatic‘s magic reflect and thorns ability. I am using a level eight in here and it has two magic attack at three speed with four health along with three abilities - cleanse, amplify and Swift. I used the Tower Griffin at the fifth place of my line-up mainly because of its Protect ability with decent range attack. I am using a level eight in here and it has two range attack at four speed with six health along with two abilities - flying and protect. the protect ability will give +2 armour to all my six friendly monsters.

I chose the doctor blight at the last position of my line up and I chose this monster mainly because of its Weaken + poison which will killing enemy cards slowly and the scavenger ability which will increase 1 max health each time a monster dies. I am using a level four in here and it has two magic at one speed with four health along with five abilities - affliction, camouflage, poison, scavengers and weaken. This time it was a 34 mana limit match with all but Dragon summoner available. looking at the fog of war ruleset, it was clear that sneak and sniper monsters will be of no use in this match. so, I went with magic attack as my strategy for this particular match. I also thought that my opponent will use magic monsters as well upon me, so I created a solid defence at the front with the Lord Arihanthus at front position and the prismatic energy at the reach position, The Lord has Thorns and magic reflect, which will damage back enemy melee and magic monsters Whenever they attack upon him. The prismatic energy also hold magic reflect and upon that, the amplify ability from River Nymph will increase all these damages by +1.

As The match got revealed I found out that my Opponent hasn’t relied on a magic line-up and instead he formed a mixed lineup with Life summoner Tyrus Paladin with Silvershield Paladin at front, followed by Silvershield Warrior, Angel of Light, Air Elemental, Peacebringer and Defender of Truth at the end. He used only one melee and one magic monster, so I wont be doing doing much with my Amplify strategy. However, killing the Defender of Truth early will reduce armours from all enemy monsters while my Lord will hold those archers long enough with it’s hardened Shield ability.

Now, below I will inspect how the River Nymph is contributing in the battle instead of writing the whole battle and give pain to my fingers😅. As the battle started, I found out that no negative stat was applied upon my monsters so the cleanse ability has no work to do here. However, I applied 2 negative stats on enemy cards - Weaken and Silence. Because of the weaken ability, the Defender of Truth was having only 2 health. So as the match goes on and the defender attacked my Lord Arihanthus, the magic reflect attacked it back. Now in normal case, I would have done 1 damage (half of its attack) back to the Defender with magic reflect, but as I used the Nymph with amplify, the damage from Lord magic reflect increased from 1 to 2 and killed the Defender of Truth easily.

In later levels as well, the River Nymph helped me with it’s 3 magic attack (+1 magic attack from Valnamore summoner) and after I killed down the first 2 monsters Silvershield paladin and warrior, the rest 3 monsters got beaten down without a sweat by my brave magic throwers.

As the opponent used a mixxed attack lineup against me but with weak front defence, the match was on my side since beginning. The Lord’s legendary defence even enhanced with Shields from Tower Griffin and more speed from the Nymph so the enemy cards really find it hard to beat it down. Thou there were 2 good archers in the enemy lineup, they didn't get enough time to dent my Lord because of the weak front defence. It was an easy win for me and with my River Nymph’s help, it took me only a lil time winning this match.

I hope the River Nymph have already touched my of your hearts. Because of her 3 ability combo, you can use her in various strategies and her 4 mana cost will also allow you to use her even in low or medium mana limit matches or in little leagues ruleset. Have you also played with this awesome and beautiful card? How was your experience with this card - please let me know in the comments below and I will be seeing you all in my next post!

!1UP Good work and nice battle!

I haven't used her much but might now. It's one of the few cards I really need to focus on leveling up. Loving that you used my card Valnamor!!

You really should get that River Nymph, she is so cool 😍

In silver she's good in certain matchups, but looks like a staple card in higher league play. Sharing this on Splinterlands Digest Twitter.

Thanks for the huge support. Please do visit again.

Oh. Mango you did it again. Congrats.