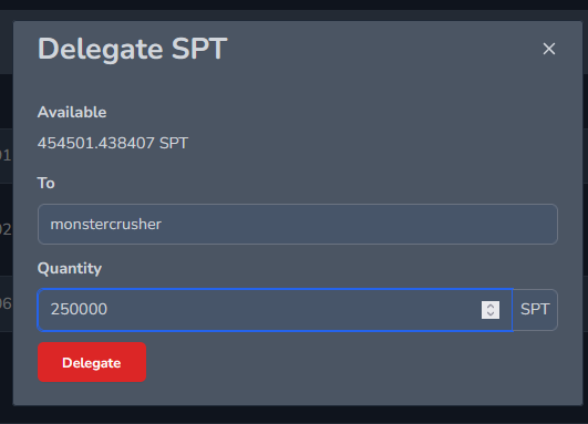 As we reported some weeks back we are reworking the SPT Content Creators initiative so we can better support the content of those who have joined. One of the ways we plan on doing this is upping our staked SPT. Today I'm happy to announce our owner @rentmoney has delegated us an additional 250,000 SPT and there is likely more to come. This brings our total SPT Power to well over 400,000 SPT which means bigger SPT upvotes are incoming for those on our list.

In the upcoming week or two we will be announcing a delegation reward system. Basically we are going to reward people for their SPT delegations. We don't plan on giving daily returns as that is already being done by multiple other SPT delegation initiatives. What we plan on doing is offering an additional upvote from a secondary account on top of the upvote you get from @monstercrusher that will reward you an upvote worth between 5X and 10X your delegated SPT amount. For example if you delegate 1,000 SPT to @monstercrusher your return SPT upvote will have a weight of 5,000 SPT or more (Initially Spots Will Be Limited Both in max rewarded upvote and number of SPT Content Creators that can join). This isn't in place yet and is subject to change until officially announced. We are also considering venturing to other HIVE opportunities such as purchasing assets for resale or for use to earn rewards to later sell and up our SPT stake and supported tokens Stake (1UP). Like all Splinterlands content we upvote, only quality Splinterlands content will qualify for an upvote from the SPT Content Creators initiative. This includes upvotes given to those who decide to delegate SPT.

Thanks for all the support

@rentmoney is a crack! 250,000 SPT added is amazing. You have doubled the power of the account.

Great to see your SPT power continues to grow.

That's so good your SPT power has increased. I have some that is staked. I am confused, if it's staked then I can't delegate. It means I have to unstake first. But I don't have much, I think a few thousand !

Delegating is possible only after staking (Liquid tokens can't be delegated). Delegations can be done from the wallet section of the tokens frontend or the Hive Dex(s) such as Hive-Engine.

It seems I need to start creating more splinterlands related content again. I think in the past I saw your upvote on some of my SL posts.
!LUV

Nice power up! Curious to know if there will be a minimum requirement of delegated SPT to be eligible to join the delegation reward system?

I haven't ironed out the details yet.

Hopefully I'll have a post out in a day or two with more information.

Perfect. Looking forward to it.
I guess it would make sense to have a minimum requirement for the limited spots at first but keen to see the parameters you set.

Congratulations @monstercrusher! You have completed the following achievement on the Hive blockchain and have been rewarded with new badge(s):

Not sure if I missed the follow up post but did this initiative ever get off the ground or has it been delayed?

Our SPT stake has been upped but the SPT delegation plans I had are on hold. I might implement it in the future once I have time to do so. I still periodically upvote posts of those on the SPT Content Creators list.

Thanks for the update. I was just curious if I missed the announcement post or not.
Completely understand the time limitations. Any other interesting projects on the roadmap?