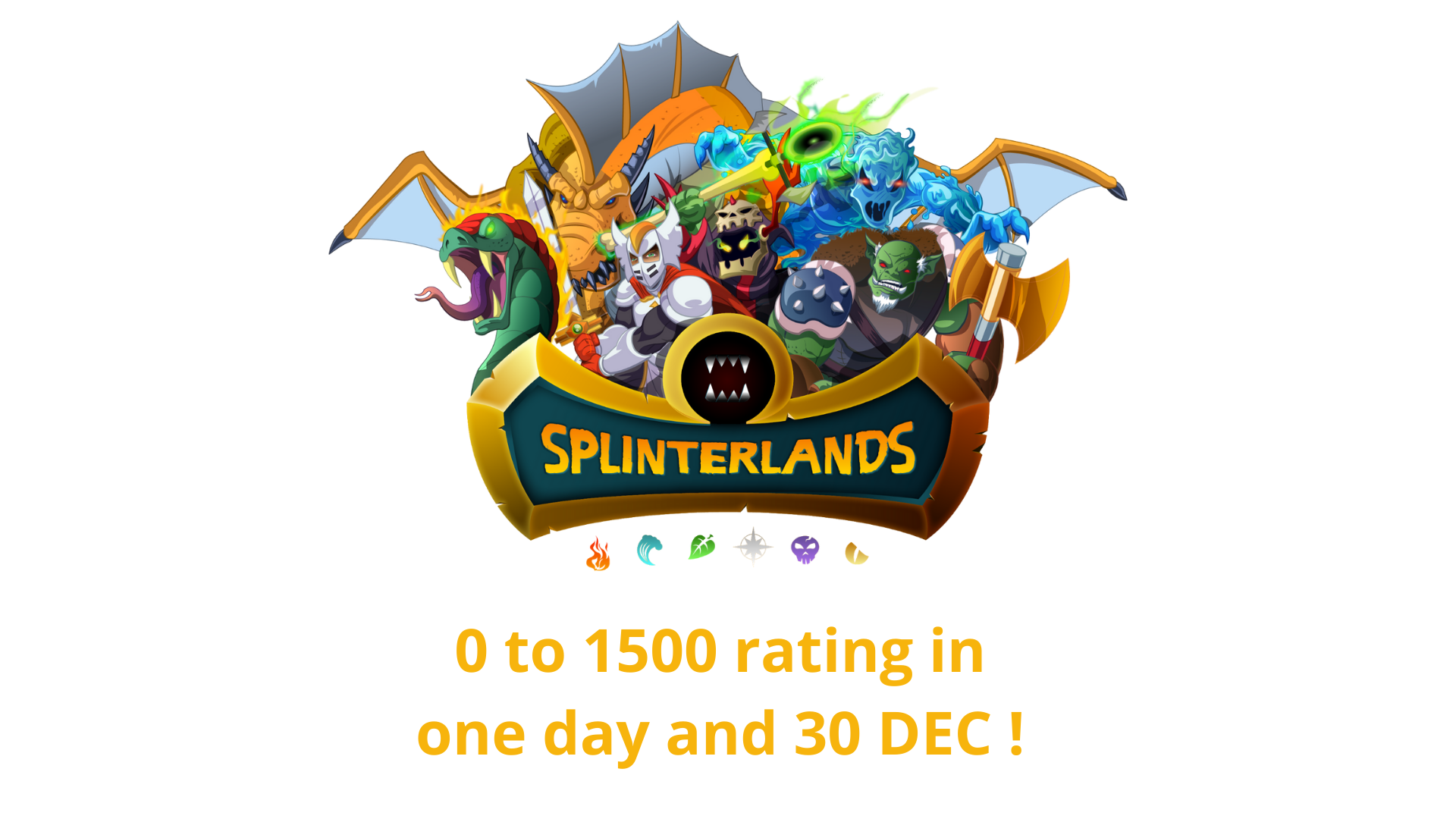 Welcome to this guide dedicated to splinter earth. Together we will discover how easy it is to climb from 0 to 1500 ranking points, spending only 30 DEC, and in only one day.

This technique is particularly useful if you absolutely must climb the rankings before the end of a season and you have little time to do so.

As a preface, I would like to point out that this guide is intended for absolute beginners, those who only have a few cards at the moment, and don't have a lot of DEC to invest in their team. These players play almost exclusively with Nv1 monsters.

It is also important not to have a lot of power collection (for once!): indeed, the goal of this guide is not to really move up in rank while playing. We want to stay at Bronze I, II & III ranks to limit our access to non-classic games (whose rules could be disadvantageous to us), but also to limit the risks of running into players with high-level monsters.

The summoner to choose

For this guide, we will use a summoner well known to those who play earth: Mylor Crowling. 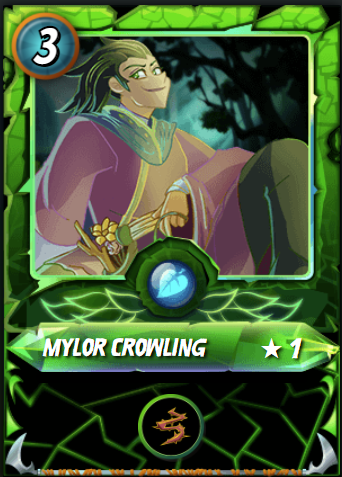 Words cannot express how much this summoner dominates almost all of his opponents in the 200 - 1500 score range!
His power (thorn) allows you to inflict 2 points of damage to each monster attacking you in close combat.
You're not dreaming: this power allows you to inflict more damage passively than most monsters have attacks at level 1.

The price to rent it currently fluctuates between 17 and 20 DEC per day. This summoner represents the largest part of the investment needed to follow this guide.
Interesting fact: it could be very profitable to buy Mylor and rent him. This summoner is in high demand (due to its strength mentioned before), so much so that the annual return on investment (estimated by peakmonsters) is 362%. This means that if you buy it at its September 30, 2021 price ($36), you can expect to get the equivalent of $130 in annual rentals.

About the Thorn ability

To be more precise, only one monster has this skill at level 1: it is Djinn Chwala, an epic card that has recently become available as a reward.

The monsters with this skill at level 2 are Cornealus (Neutral), Hydra (Neutral) and The Vigilator (Dragon).
It should be noted that while Thorn is a very useful skill in close combat, you will have a harder time fighting ranged attacks as well as magic attacks.
Let's see how we can solve this problem.

The cards that will be useful to us

As you will see, my selection of playable cards is reduced because we are playing with a very small budget.
This list of cards is not exhaustive, you can of course include strong cards that you would already own. Nevertheless, I think this is a good minimum list for maximum results.

1. Let's start with the neutral monsters.

One card is particularly essential in this guide, but it is also essential for most players at a certain level, and that card is the Furious Chicken.

This card is basically very interesting because of its zero cost: whenever you have a place left in your team (in low mana fights for example), you can use this monster as a punching bag to take at least one hit from your opponent.
This is useful in several cases:

In addition to its protection utility, the chicken is essential with Mylor since it potentially allows you to inflict 2 extra points of damage in the case of a melee attack, for absolutely no cost.

The chicken costs between 3 and 4 DEC per day, but it is absolutely worth it and indispensable

Another very interesting and similar card is the Creeping Ooze.

It has only 1 HP for a cost of 1 mana (unlike chicken which cost 0), but this monster has an interesting ability: it reduces the speed of your opponent's monsters by 1.
In addition to potentially generating 2 extra points of damage for a cost of 1, it allows you to slow down your opponent's team, which will be very useful for our tank's healing, which we'll talk about in a short while.

You can get creeping ooze for the modest sum of 0.8 DEC - 1 DEC per day! I advise you to rent it regularly to always have one on hand.

The last card I suggest for neutral monsters is Gelatinous Cube.

This choice may seem surprising since it is rarely used at low level. Indeed, the gelatinous cube gets its regeneration power at level 6, which starts to make it very interesting as a VP bag.

However, it has the Scavenger ability from level 1, which gives it 1 health point for every monster that dies in the game.

This is precisely what makes him strong: the longer the game goes on, the more enemy monsters will die, the more VP he will gain and the more difficult it will be to kill him, as he is theoretically healed by one of the land cards. It's not uncommon to see my Gelatinous Cube get to 14 HP in first place after my tank dies, which is a long time to kill when most monsters at this level only inflict one or two points of damage. Of course, to top it all off, let's not forget that it also has the thorn ability.

The Gelatinous Cube is available for the modest sum of 0.1 DEC per day.

As a start with the Earth monsters, we will talk about the only healer usable at level 1 in this splinter: Wood Nymph

His stats are indeed not impressive: 2 HP and 1 magic attack for 4 mana. However, his ability is crucial in our game plan in which we want to keep our monsters alive as long as possible so that opposing monsters break their teeth in hand-to-hand combat against them and often end up killing themselves.

There's not much to say about Wood Nymph except that you'll need to protect her at all costs in battle.

This card is rentable for 0.8 DEC per day.

This card is beastly: it costs 8 Mana, but it brings you 3 attack (at 4 speed!!), 10 HP and especially its VOID ability allows you to reduce the magic damage inflicted to this monster by 1!

You're probably starting to understand it: Unicorn Mustang is an all-purpose beast in this team. She can destroy any other tank with Thorn, and has great resilience thanks to her HP, Void and Wood Nymph.

This card is rentable for 0.1 DEC per day!

Let's finish this list with two cards that will help you hit hard and help Unicorn Mustang.

Magi of the forest is interesting for it's 2 magic attack for a cost of 4 mana. Obviously, it's health is not that great but it will come handy when facing Life teams with shield or Fire team with Living Lava.
You can rent it for 3 DEC per day.

Beatrix IronHand is very useful thanks to its close range ability : it allows her to keep on hitting at distance even when she is in position 1, the one reserved for hand-to-hand.
It also has a very good speed and life.
You can rent her for 1DEC per day.

As mentioned in the previous paragraphs, the game plan will be very simple:

End of the guide :

I hope you have found this guide useful and have learned several things. This is the first time I've done this kind of writing so I hope your feedback will be positive. Feel free to leave comments to let me know what you think of the guide!

Hello @oera! This is @indayclara from @ocd (Original Content Decentralized) team. We saw that you already posted your first blog here in Hive! Congratulations and welcome! Great to hear you are enjoying Splinterlands.

It would be awesome as well if you do an introduction post so that people can get to know you, check if you are a legit person (not some scammer), and other Hivers will be comfortable supporting your works here.

I just rented a level 8 Mylor Crowling card for 1 day for 300 Dark Energy Crystals (DEC). Let us see how this will turn out. I have not even heard about this card so far, but I play Splinterlands since 2018.12.30.

Thank you for this guide. I give you some !PIZZA.

By the way, it is funny to see that the current estimated value of this card is $2898 USD. Almost my annual/yearly pension-like income, which is approximately $3000 USD.

These prices are crazy.

Not 8 times, but 8 level. Although, to be honest, I still do not know, because I currently do not have level 8 monsters.

@oera, you've been given LUV from @coolpoolparty.

Hey @oera, here is a little bit of BEER from @coolpoolparty for you. Enjoy it!

well explained post thanks for sharing such great and detailed knowledge It should really help for the user like me and others too. . I will try to boost up to silver this time. 👍

followed you to get more great information from you. 😀

have a great day and weekend too.😀🙏

Very good guide! This is exactly what i did and it works. Here's another option to mix in if you want to go farther. https://www.splintertalk.io/@powermeat/17-game-win-streak-for-15-dec-rental

By switching up your strategy, you'll become harder to counter against.

Congratulations @oera! You have completed the following achievement on the Hive blockchain and have been rewarded with new badge(s) :