I'm hosting my first Splinterlands tournament and the juicy details about it can be read below. I tried to make the payout structure as flat as possible so as many entries can earn ROI as possible. This isn't just your everyday regular Splinterland tornament (No Sir Bob). This tournament is a Bounty Tournament that will award additional SPS on top of the SPS that can be won in the payspots. You will have to keep reading on if you want the details on how that works.

Don't miss out: Join the first ever Splinterlands Bounty Tournament. Its only 25 DEC to do so!

I didn''t check in but got a payment of 664 SPS. I will now use those 664 SPS to put on TWO tournaments that will be played in the Bronze League for all to enjoy. I would have liked to make this a freeroll with no requirements but if I did that an army of bots would join so instead I put some easy to reach entry requirements on the tournament to hopefully deter armies of bots.

Beat me in a Splinterlands battle and come brag about it in one of my Hive blog topics and you will be transferred 5 SPS. Bounty Bonus is taken from the 664 total SPS I recieved from the previously mentioned canceled Splinterlands tournament. Any left over SPS from the 664 total will be used to set up a second tournament. Only battles in the Mini Bounty Brawler count towards the Bounty Bonus. A max of one bounty can be claimed per player. 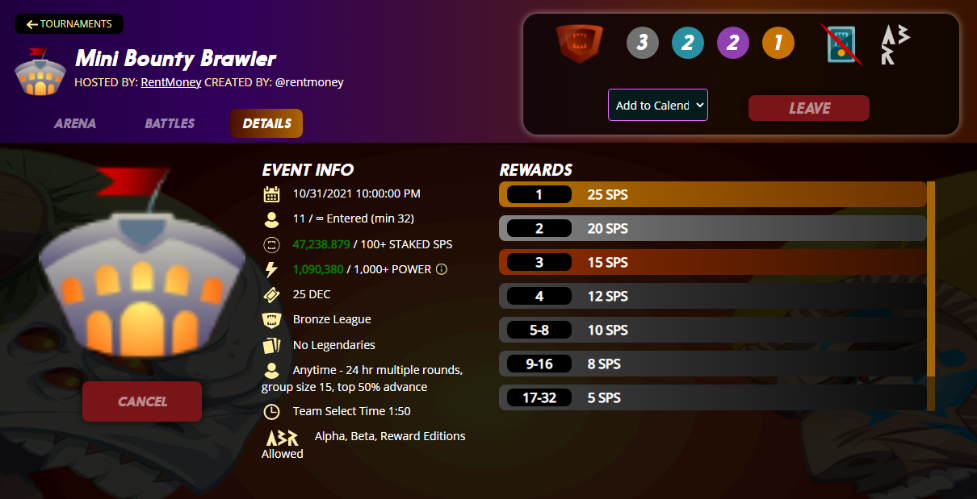 Kinda interesting tourney, but I not play with alpha beta cards :D

The rental market can help you with that.

Nah, too many cards too rent and I will not use this cards on ranked games, because of low level, so probably not worth for me.

Great tournament, and on Halloween night too! I'm going to go register for this right now. Unfortunately I wasn't available for the Brawler, so I never registered. I hadn't heard that it was cancelled and everyone got a payout anyway. That's a pretty great payout for not even playing and your pretty awesome for sharing it with others!

Not everyone got a payout. The ones who checked in shared the rewards. The ones who didn't check in or were unable to check in got their buy in refunded. Thanks for joining, I'll see you on the battlefield :)

Be gentle with me ;)

Excellent tournament that is making @rentmoney, this is a great opportunity for all of us who are starting in splinterlands.

Thanks for the !PIZZA and !BEER.

What a tournament! Thanks for sharing your payouts with the community.
Good luck to all the participants.
!PIZZA

Its nice to read that the tournament layout is appealing.

Good luck with collecting those rewards and possibly even a bounty :)

Creating a Splinterlands tournament suitable for new players (Bronze level) is one way to show your love for Splinterlands.
Thanks a lot