Over the past few weeks and months the US economy to include cryptocurrencies has taken a hit. Being almost 50 years old I have went through a few downturns in the finacial markets before. This one in particular has many problems with inflation being one of the top issues. The reason for the inflation is that Biden happily handed money out time and time again. The American public was happy to take the money for various reasons. The problem is this, when a government hands money out the way the Biden adminastration did, someone has to pay. All the money handed out comes from somewhere and when you are talking about from a government it comes from one place, the tax payers.

So why the inflation? The money handed out was used to boost the economy. However, there are negative sides to boosting the economy. With people having more money on hand they spend more which drives up the price of goods. The price of goods goes up, the flow of free money is shut off, and therefore the money you work hard for is worth less then it was prior to the free money being handed out.

Know let's talk about the taxes paying for the free money that was handeed out. I as most of the people I work with had a shock when it came tax time. Many of my co-workers expected to get large sums of money back on the taxes this year becuase they had kept their taxes the same as previous years. This year most of my co-workers me included recieved less money back on our taxes and in some cases even ended up owing taxes. This is because we are know paying for the money that was handed out. They will never tell you that we need to pay for all that free money, but anytime money is given out by a government it can only be repaid through taxes.

So as the financial markets stumble we will see up swings but I think we have a few months if not about a year left of downturn. I believe we will see about another 10-15% drop in value from where the markets are today. But keep this in mind. In the history of finacial markets over the course of time they continue to rise. If you look at the DOW Jones Industrial chart for the last hundred years you see one thing. A CONTINUED UPTREND. 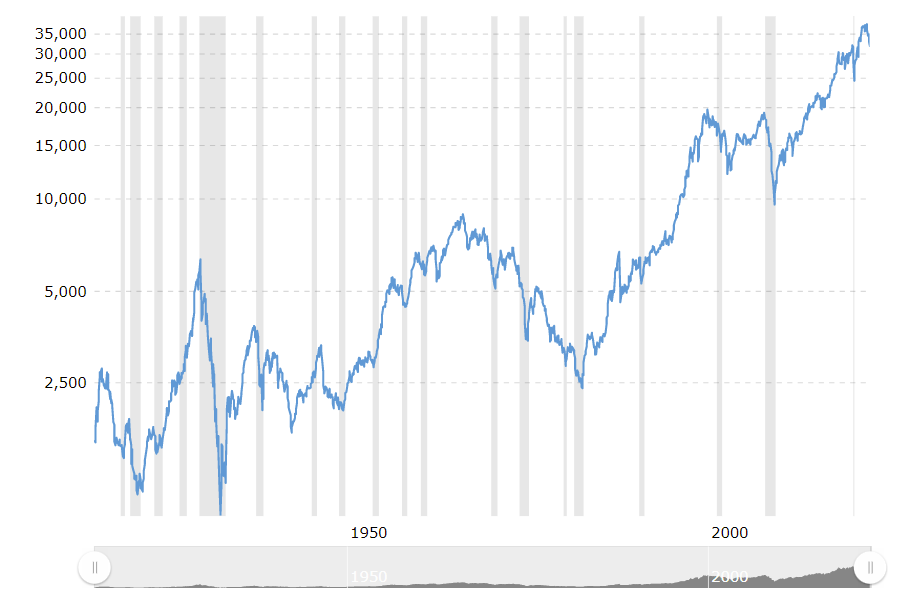 This chart is from https://www.macrotrends.net/1319/dow-jones-100-year-historical-chart.

The chart above shows from the 1920's to current and as you can see the DOW spiked and dropped around the 2,500 level and then increased. Over the years there are downturns but the it always recovers better then it's previous highs.

So with the markets current downturns I would say expect more down before we fully recover and reach new highs. 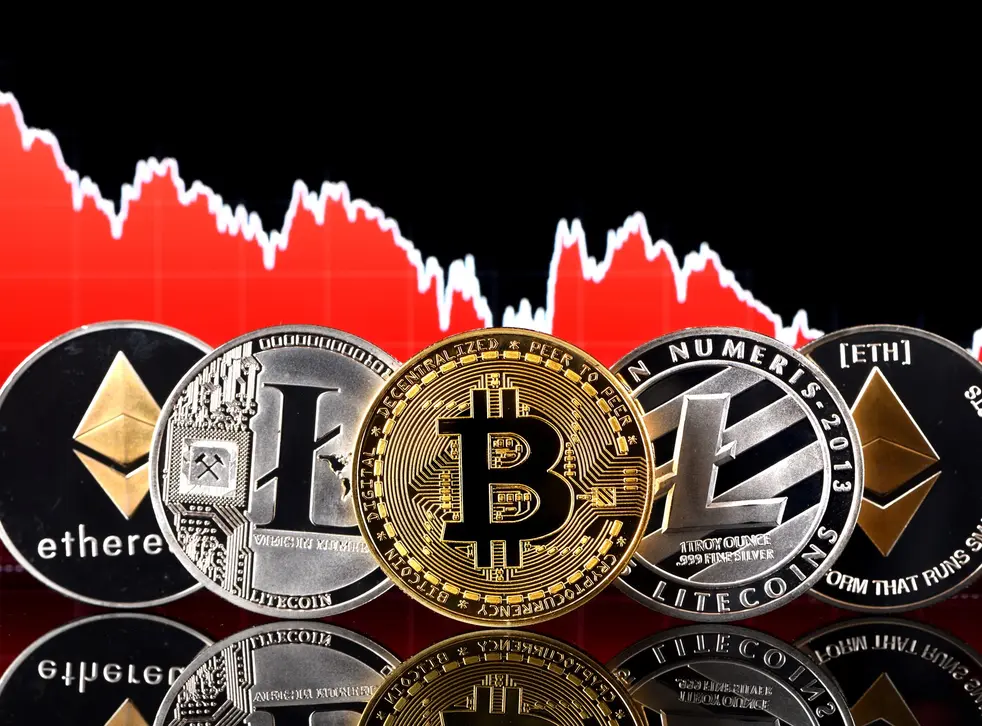 I purchased Bitcoin, Ethereum, and Litecoin back in 2016 along with many of my co-workers. At thte time Bitcoin was about $2,300, Ethereum about $240, and litecoin was about $22. We then saw a huge spike as Bitcoin and all the other coins rose, Bitcoin reach $20,000. The cryptocurrency market then crashed similar to what it is doind today. My co-workers sold their cryptocurrencies becuase the coins were worth less then they bought them for. I kept mine knowing that markets always recover and surpass their previous highs. The only problem is sometimes it can take a few years to recover. But as you can see Bitcoin is way down from it's most current highs that it has recently reached of around $60,000 but it is also well above what it was worth in 2016.

So lets all hang in their and take it from this older guy. Our cryptocurrency markets will return and give us returns higher then previously believed.

So for know, I am holding all my cryptocurrency and playing both SPLINTERLANDS AND RISING STAR. I enjoy both of these games. I keep slowly purchasing cards in Splinterlands since the credits are still valued at the same price no matter what the cryptos are doing. I also try to reach the highest levels in the Seasons to be able to claim the most rewards as I can.

I also try to complete the daily quests each day. Sometimes the rewards are small but even the small rewards are worth something. Those little rewards are being recieved in a down market right now, so I expect them to be worth more once the markets recover and they always do. The last two days I have had decent rewards for my daily quests. Yesterday I had the dragon quest and got a few potions, a little DEC, and a Chaos pack. Today I had the neutral quest and received an epic and a gold foil. So the last two days have not been bad. 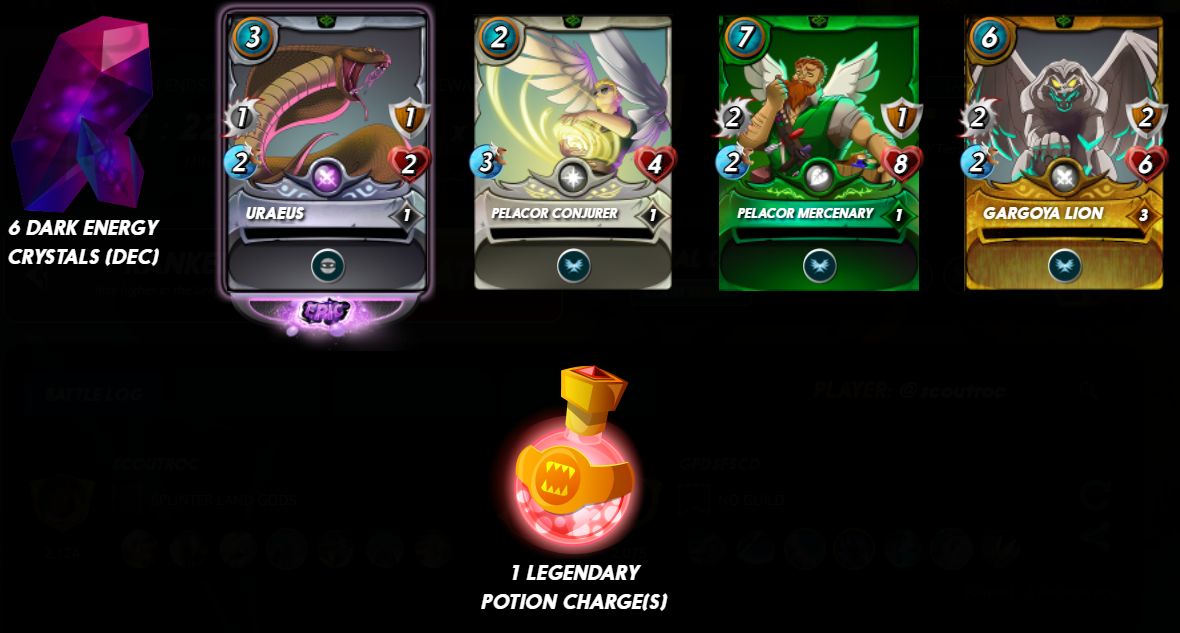 So to everyone out there hold on tight and keep on playing the Splinterland, the card market will follow the cryptos up and down. Believe me when I say it may be a year or two but cryptos and our Splinterland card values will again go up and reach new levels you previously did not think possible. Our SPS and DEC will also follow these trends, so keep collecting them and wait for the turn around when the markets are high again.

Good Luck everyone and may your seasonal and quest rewards be EPIC.

If you are thinking about joining the fun in Splinterlands or Rising Star click on my link below.

Thanks for your overview and I regret that I didn't buy Bitcoin way before when it was much cheaper.

Also our (world) economy led by America is doomed from the time they sold their right to create money from thin air signing the Federal Reserve Act in 1913. Now it is just a matter of time for them to pull the plug out and push us to the edge of doomsday!

Good luck to everyone and bless you all! 😉