First of all, the Splinterlands team wants to thank everyone here for being a part of this community and making all of this possible! In the first 24 hours of the Chaos Legion general sale there were a total of 2,109,682 packs sold plus 231,746 bonus packs awarded in 27,249 separate purchase transactions. We will be reviewing the guesses submitted in the contest and will be announcing the winners shortly.

While the website generally held up well during the launch, there were unfortunately some issues with payment processing for credits purchases due to the overwhelming volume. Our development team resolved the issues within a few hours and our support team has been doing a fantastic job of working through the tickets.

Since it ended up taking a while for support to resolve all of the failed credits purchases, we will be extending the window in which all pack sales will be eligible for the next THREE airdrops until 4:00 PM EST / 21:00 UTC today in order to ensure that those people who were waiting on failed purchases have a fair chance of getting their packs in time.

This means that everyone has approximately another 3 hours left to purchase Chaos legion packs that will be eligible for the first three general sale airdrops - plus all of the eight remaining airdrops to be released over the life of the edition!

The first two general sale airdrop cards - Lira the Dark and Iza the Fanged - were announced last week in this post, but since we've gone over 6M packs sold in total in the first 24 hours of the general sale we've unlocked an additional airdrop card!

The additional airdrop card will also be Legendary rarity and have the same 0.2857% chance of being dropped for each pack purchased, meaning that 1 in every 350 packs on average should receive the card.

Additionally, just like with Lira and Iza, players will be GUARANTEED to receive one of the new airdrop cards for every 350 packs purchased before 4 PM EST / 21:00 UTC today! Also like Lira and Iza, each airdropped card will have a 4% chance of being gold foil!

The third airdrop card of the general sale (5th in total, not including Dr. Blight) will be the Legendary Fire Monster - Grum Flameblade! Grum is a massive, 11-Mana, Melee tank with high health and super thick skin that acts like armor. His thick, armored skin also absorbs Magic attacks and it reduces the damage taken from them while he also does double damage to targets that cost 10 or more mana through the Giant Killer ability.

Finally - Grum is the first and only non-Gladiator card to have the Bloodlust ability, which increases all of his stats by 1 point every time he kills an enemy!

We are still in the process of getting everything ready for these next three airdrops, so they will be a little bit delayed. We expect they will be released no later than the next couple of days, however only packs purchased before the deadline at 4 PM EST / 21:00 UTC today will be eligible.

Get your packs now so you don't miss out on your chance to receive these three amazing new airdrop cards!

no way a bloodlust card.... im so excited lol grum was my favorite set in the card with just the artwork but now... i cant wait for this airdrop!!

Blood for the blood god, skulls for the skull throne, as they say

Wow yeah this bloodlust card does look awesome and Grum with bloodlust will be an awesomely strong card if he gets almost every single kill.

pray pray pray... wish the lady luck is on me :D

!PIZZA to increase your luck

Additionally, just like with Lira and Iza, players will be GUARANTEED to receive one of the new airdrop cards for every 350 packs purchased before 4 PM EST / 21:00 UTC today! Also like Lira and Iza, each airdropped card will have a 4% chance of being gold foil!

I hope this means one of each of the released cards.

yea, it means one of the new Grum airdrop cards for every 350 packs purchased...you'll also receive one of Lira and one of Iza for each 350 packs purchased as mentioned in the post announcing those cards. So you'll get 3 cards in total.

@allcapsonezero 64
about 1 year ago (Edited)

If you bought 350 packs, you will get one of each (minimum)

I think so if I understood correctly. I am buying my packs now for the remaining airdrops probably will land around 2800 bought and flipped with some unopended and keep cards I want and flip the rest to buy new packs.

Yes. One of each. Was explained in AMA.

I don't get to listen to most of the AMAs - But I always like to have the clarification when there is some ambiguity, especially at the volumes that some people are buying at :)

i know, i was asking myself the same thing, that's why i checked.

Thanks Splinterlands Team! This launch is a testament of great things to follow.

Amazing numbers! At this rate, the packs will be gone by the end of the week. That probably won't happen since buying will slow down but maybe by end of January.

That is an OP card yet 11 mana... will be interesting to say the least!

Be amazing in the Reverse Speed rulesets...

In case you didn't know, during the Reverse Speed rule set, Bloodlust won't increase the speed of the monster. Instead, it would actually reduce the speed, if possible. In this case with Grum, it wouldn't change his speed at all, but all his other stats would increase +1.

I did actually realize this last week when I had a Reverse Speed brawl... but given that he's speed is 1 he might become a must have for Fire Splinter Reverse Speed games (especially since I don't have Living Lava).

@indiaunited 65
about 1 year ago

Thank you very much for extending the deadline. I didn't understand there was a cutoff until now.

Its a beast of a card... Love it! Great to see bloodlust make its way into regular play too! Now everyone will find out why the Brawl cards are so much fun!!! Thanks

Whoah! Someone got out of the arena! Get him! Quickly! Excited to see his lore! Hopefully something benefitting his ogre physique.

So excited for this!! Grum is my favorite of the three newly revealed airdrops! Excited to play with him!

Got a gold foil grum holding onto that one.

good luck for all ;)

Looks like a lot of fun! Good to see a nice heavy melee hitter!

If I bought packs now, would it count towards the remaining airdrops (other than these three that just unlocked)?

Can't wait to get this lethal green giant - with bloodlust!

thanks so much for, well, everything!!

I'm going to assume that this will easily become one of the most broken cards. I can't imagine those stats will stay as strong as they are right now.

Kinda wish BL would have stayed in brawls. Kinda makes brawl cards less special on to of not being able to sell them.

@yabamatt do we have a guestimate of when the airdrop will occur, i can't wait to see Grum in action

This turned out to be spectacular!!!
You guys did the right thing by requiring Vouchers. Without that folks like me would have barely had a chance to get in 😄
!PIZZA

I made a German translation of this post for a better information of the German-speaking community.

This card is too overpower.

Thankyou for creating the Splinterverse for us all! 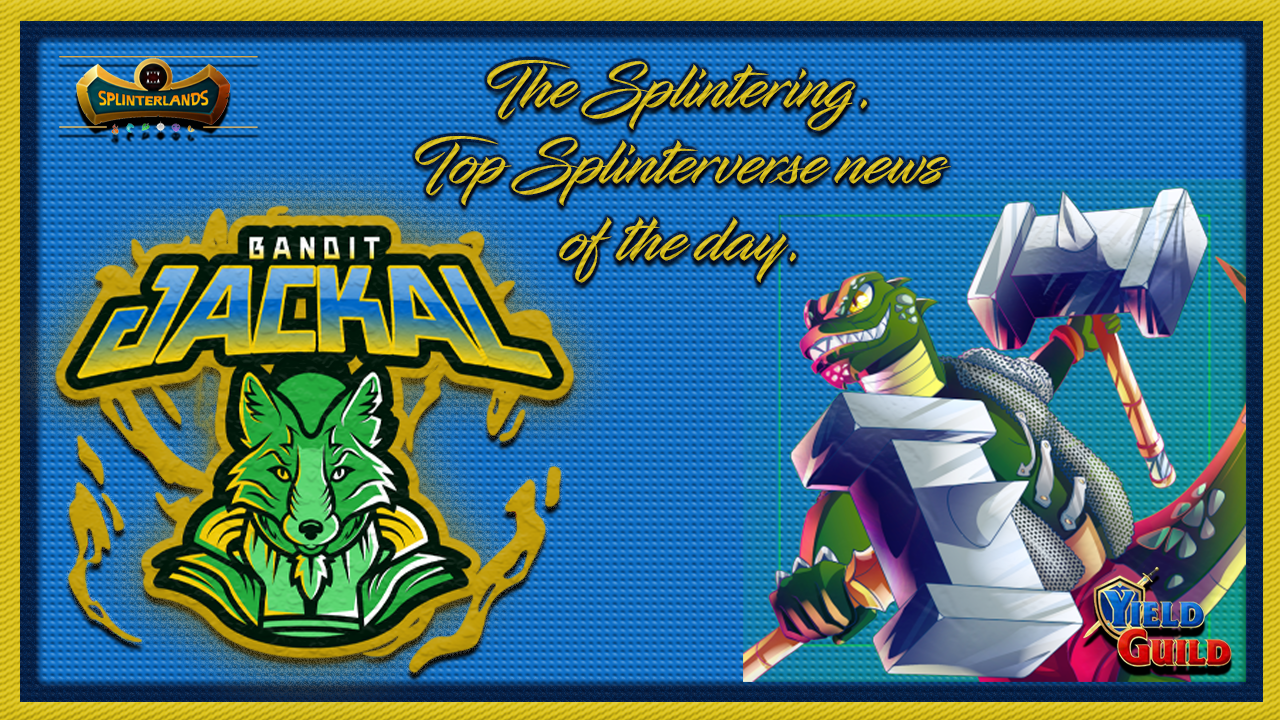 Maybe i'll be able to counter lhama kron with this one

Received a nice gold foil legendary air drop of one of the cards which I will be holding along with my other two I have gotten so far. Likely will buy 500 or 2000 more packs to flip today and get more airdrops for the rest.

Amazing release but it needs too many packs for me XD!!
Finger crossed for the next airdrops ^^!!