@yellowscotsman 32
about 1 month ago
Splinterlands

Welcome back to my predictions for Chaos Legion! If you missed the first
two editions where we talked about the Fire and Water Splinter, check out those first

What can we expect from the Earth Splinter in Chaos Legion

Earth is the second strongest splinter in the lowest leagues mainly due to Mylor. With thorns early game, there are not many line ups that can effectively counter mylor. The one one that consistently beats a mylor is magic. Earth has alot of really good cards such as Kron the Undying, Scarred Llama Mage, Wood Nymph and Mitica Headhunter that provide alot of sustainability and damage at the same time

What are we losing in Choas Legion

In Chaos legion modern mode, you will only be able to play Untamed edition, Dice Edition, Chaos Legion Edition along with the Reward cards that come with these sets. That means that we are going to be losing some powerful cards 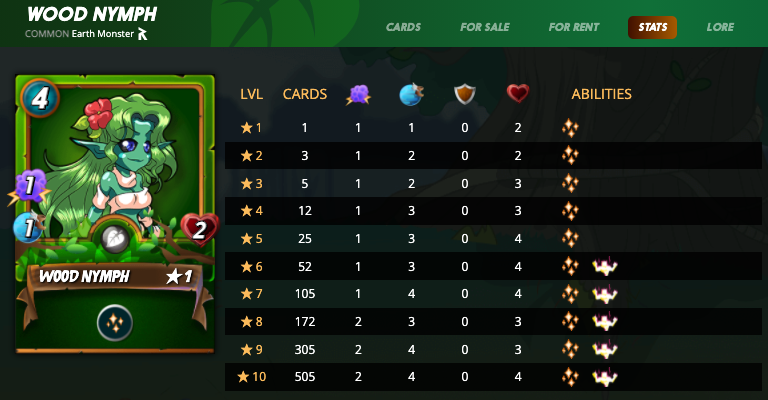 3. Spirit of the Forest

I have to admit, these cards are powerful but not OP unlike those we saw in the Water Splinter

To be honest, Earth isnt losing that much compared to the other splinters. Wood Nymph is probably the biggest lost but easily replacable. Will be interesting to see which direction they choose to go with Earth since Earth has everything already.

We will probably see some healing cards again to replace the lost healing and also add some support spells like Clense. The Team mentioned that Chaos legion would be designed to counter existing cards and for Earth, the main counter that they will probably go for is the Scarred Llama Mage ,Kron the Undying line ups. The counter this, they already introduced Force Field that Monster takes only 1 damage from attacks with power 5+, Phase where Magic attack can miss this Monster (using the same hit/miss calculation as for Melee and Ranged attacks) and Death Blow which makes Monsters do 2x damage if their target is the only Monster left on the enemy team. If they introduce more cards with these abilities, Scarred Llama Mage and Kron the Undying will be countered hard

As such, i feel that they will further build upon 2 themes for Earth. Dual attack types minions and sustainability. Dual attack minions are insanely powerful but lack support cards for it. None of the current Dual attack monsters see consistent play and i think Earth will be the splinter to change that. They already have Oaken Behemoth which needs some support summoners or monsters that either give more attack or more sustainability. For Sustainability, Earth has alot of heals and resurrect already and i feel they will be adding in more cards that give return fire or Magic return to help with the sustainability

What should you do?

Honestly nothing. But if you do want to predict the market, picking up a Oaken Behemoth and Spirit Druid Grog while they are cheap could work out for you in the long term

Do you agree or disagree with my predictions? Do leave a comment to let me know what kind of cards you are predicting for Water in Chaos Legion