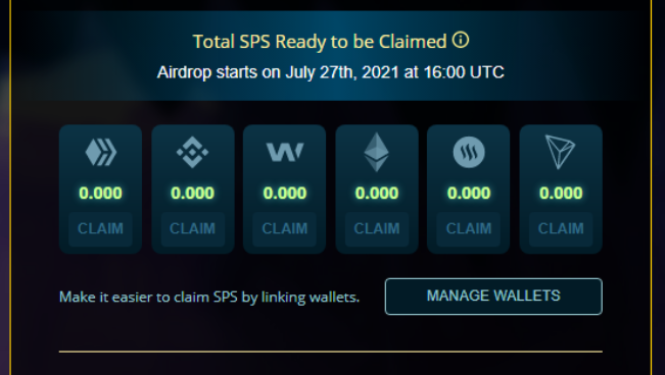 It's exciting times in the Splinterlands universe. All its Monsters Maniacs on Splintertalk street are patiently waiting on the new governance token that is being called SPS to be airdropped. This airdrop will start in about 24 hours and will last for 12 Months.

The exact timing of the first SPS airdrop token will be July 27th, 2021 at 16:00 UTC. Every 24 hours after that for a year straight more SPS tokens will be airdropped to everyone and anyone who is holding Splinterland assets. 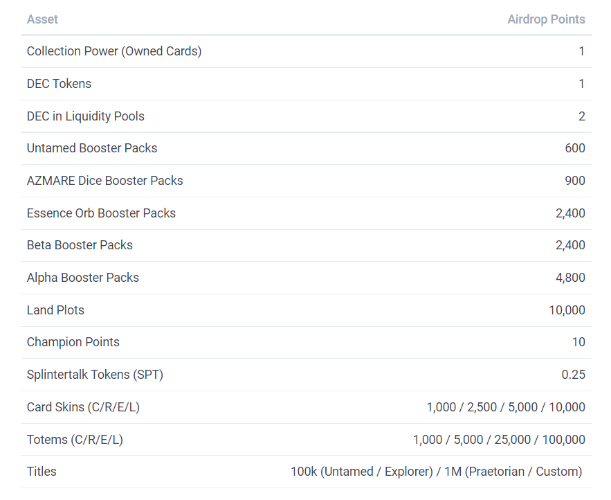 400M SPS tokens, or 13.33% of the total token supply, will be airdropped to players based upon the amount and type of Splinterlands assets held in their account. Rather than have a specific airdrop date/time with a snapshot as is common, SPS tokens will be airdropped to asset holders on a daily basis over a 1-year period. The goal is to encourage players to accumulate and hold Splinterlands assets over a longer period rather than having a big rush up until the snapshot followed by a dump shortly afterwards.

What will these SPS tokens be worth upon release? I have no clue but I suspect as with all things Splinterlands related the players of the game are going to go bonkers for them. These aren't just your regular crypto tokens. These SPS tokens are goverance tokens which will give the power to help decide in which direction the Splinterlands game is headed. The more you stake the more decision making power you have.

The primary benefit of staking SPS tokens is participating in the governance voting system which is expected to be released in Q4 of 2021. This will give players an unprecedented level of control and ownership over the parameters and overall direction of the Splinterlands game and ecosystem.

In addition to the governance voting, starting within a week of the SPS token launch players who stake SPS tokens will begin receiving a portion of the 7.5M SPS / month Staking reward pool as described above.

The Untamed Edition boosters have been sold out for weeks now but can still be purchased on secondary markets such as Hive-Engine. They are a bit more costly then their orginal purchase price of just $2.00 USD. Today if you want to purchase an UNTAMED booster it will cost you $8.00 USD. That's a four times increase from their orignal price. Luckily the cards inside these boosters have also risen in USD value.

My Pack Opening luck has never been that great but I just so happen to have an UNTAMED booster pack that is begging me to open it. Upon opening it we will review the cards and their USD value to see if I can come close to the expected value of $8.65 USD (Using Potions). And here we go.......

Looks like my Pack opening luck hasn't changed much but I did get the awesome Epic card known as DARKEST MAGE. Its current value is $1.98 USD so that card alone has paid the price of my UNTAMED booster as I purchased the UNTAMED booster months back when they were still $2.00 per booster pack.

Card Values In My Opened Booster

Even though it is one of the most skilled Dark Sorcerers in all the Splinterlands, the Darkest Mage still does not have the full trust of the Lord of Darkness. The Mage has never betrayed the him in any way, but the Dark Lord claims to be able to see the “true state” of the Mage’s soul. The activities of the Darkest Mage are always supervised by a specialized team of Skeleton Keepers, who the Darkest Mage refers to as its “jailors.” Lore taken from official Splinterlands site. Splinterlands is a digital card game created by @aggroed and @yabapmatt. Game release has launched and prizes are already up for grabs. You can get started with investing in or playing Splinterlands by clicking here.

@pizzabot 44
about 2 months ago
Connect

It seems as if I onboarded the game soon enough to participate in the airdrop phase. Very exciting, I must say. Hopefully I can get a plot of land on the secondary market until the end of this phase.

Congrats on jumping aboard before the airdrop starts.

@rentmoney 70
about 2 months ago (Edited)

If you have any questions about the game fire away and I'll do my best to answer them.

Just buy a Spell book and enter the game. You will not regret about it.
And learning by playing is much faster than reading and watching :)

These last 24 hours are going to feel like they drag on forever! I keep clicking on the SPS Management tab just to see if my latest acquisitions are showing up yet. This is going to be a crazy and exciting year. And with Bitcoin finally looking to be moving in the right direction, it's just going to add fuel to the fire.

I feel the same way. I too keep checking my SPS airdrop points. I sold a card for $44 and played a few ranked matches so that added a little DEC to my holdings but so far my drop points haven't changed. I might rent some max cards on the last day of the season to try and get some champion points.

I've been thinking about trying to get into champion league again. At 10 airdrop points per champion point that gives them a value of 10 DEC each. Even a few champion match wins would add up pretty quick. Plus you get the DEC from match wins AND the extra reward chests for the higher league. If I have the time I'm going for it.

I'm going for it to. My plan is to wait until last day of the season and then rent a max team for 24 hours. I already have a maxed Death and Dragon summoner so I'll focus on renting a few monsters for them. I'll re-evaluate after season end.