Cheap Monsters with Hidden Abilities to Play in Silver League : NEUTRAL and DRAGON

@epoq 52
about 1 year ago
Splinterlands

In silver league, provided you have a maxed out summoner (Common 5, Rare 4, Epic 3 and Legendary 2), you can summon COMMON monsters up to LEVEL 5. Some common cards acquire a second or a first ability between LEVEL 2 and 5.
~
This serie of posts focuses on cheap common cards that acquire a second ability before or at LEVEL 5.
~

I focus only on cards that cost less than 1$ / BTX based on peakmonsters stats at the time of writing.
~
This is the last post of this serie focusing on 3 NEUTRAL cards and 1 DRAGON card (links to the other posts at the end of this post).

Since Gargoya Lion is part of the new rewards collection, it is actually one of the cheapest card of the game. At LEVEL 5, it aquires VOID (Reduced damage from Magic attacks). Since it also got 2 ARMOR, you can be sure that Gargoya Lion as a tank will at least stand for a couple of rounds before being taken down. 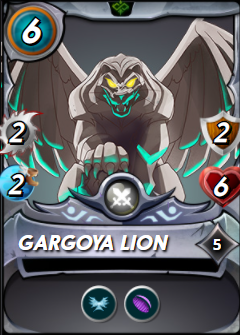 Elven Defender is like the big brother of Gargoya Lion. It got more LIFE, SPEED and ARMOR, and instead of reducing magical damages, it reduces the physical ones thanks to the ability SHIELD (Reduced damage from Melee and Ranged attacks) that it acquires at LEVEL 5. 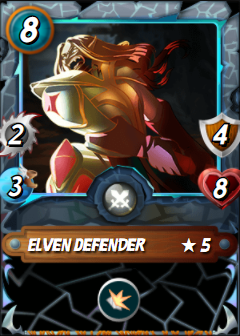 Grumpy Dwarf should definitly be more played. At LEVEL 5, it acquires ENRAGE (Has increased Melee attack and Speed when damaged). Since it already possesses REACH (Melee attack Monsters with the Reach ability may attack from the second position on the team) from LEVEL 1, it can be set in the second position against a deck using BLAST in order to quickly enrage him. 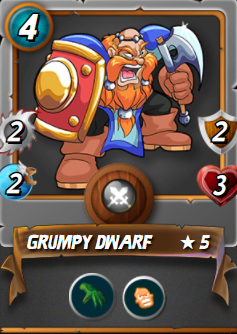 Naga Brute is definitly a game changer. It acquires THORNS (When hit with a Melee attack, does damage back to the attacker) at LEVEL 5, while having VOID ARMOR (Magic attacks hit this Monster's armor before its Health) from the start. For only 6 MANA, this tank can sustain anything since it has 9 ARMOR, while still being able to deal back some damages, it's crazy! The only issue is that it requires a maxed up DRAGON summoner to be played, and those are usually quite expensive! 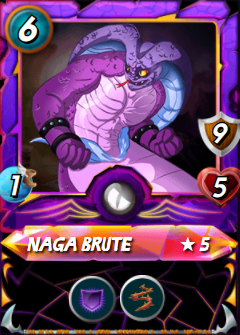 I regularly post about cards, strategies and I sometimes do giveaways. Follow me to be the first to know !

My referrals for : Splinterlands, Rising Star.

Thanks, that's the last post of this serie, but I'm gonna a post that summarize the whole serie ;)