If you read this, you are probably not a new player.

Just imagine this: you join spinterlands excited to get your first gaming NFT's and tryout some battles and see if you can get good at this.
After your first battle you notice you will not get anything, ok, ok. So you take some time and effort to do you first crypto transaction and buy the spellbook. Exciting! Then you play another game, you loze some against bots and than you WIN one! You get absolutely nothing?! Ok, mightbe if you play for a week and your league increases? NOPE! YOU CANNOT INCREASE IN LEAGUE!
NO rewards, NO progress!

Even if you manage to get some rewards in , for some reason splinterlands thought people in low leagues need more potions...

Talking about the new reward system:

Quote Daily quests will change to daily "focus" where players will receive a certain amount of reward chests based on the total amount of reward shares they have earned from ranked battle wins using the focus element (splinter) over a 24 hour period.

So if you would play a lot of battles (ultimately 24/7) you will get more rewards, guesse who plays the most battles, yes bots. There is a ERC correction, but this is linear, just like DEC rewards, they simply get more. 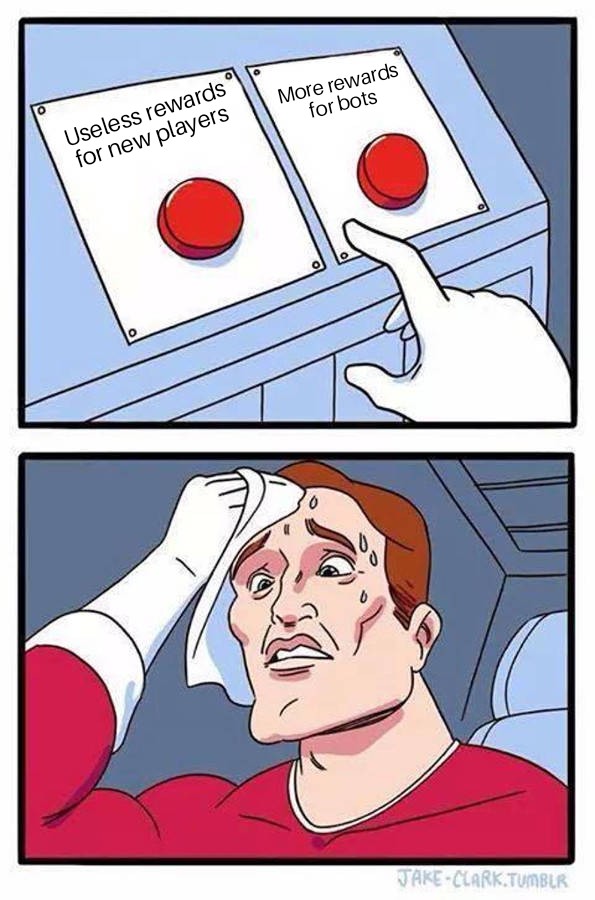 Nobody is going to drop a few hundred dollars into a game that gave them nothing.
The amound of active players is already not increasing, this will make it worse.

Even new players only purchasing the spellbook can earn thousands of reward shares (and cards) over the course of a year if I understand the math correctly. Time will tell, but I am optimistic about the rewards changes and its potential on new/veteran players alike. I think bot farms extracting value from the game will be dis-incentivized because of the 'ghost card' change. If the do still exsist, they'll probably have to merge account/resources. Maybe we see less bots?

Bot farms only have to buy specefic cards / summoners and they are set.

For new players you will not get shares of you use ghost cards, so no shares unless you buy stuff. Amd then they get 3 times more potions than higher leagues.

I don't know i mightbe wrong.
But for example, how would you get friends excited about splinterlands?

I invested you have to unless you dont want to make anything like probably need a couple grand. I have about 50-60K in my Deck and ingame assets I make about 1 - 2 bucks per SPT vote which I do 20-30 a day so its likely $60 a day about 36K just from SPT voting. Staking SPS almost 300,000 staked - get about 60 a day in vouchers and I get about 154 SPS a day from staking, will be adding to the LP pools soon again but not until after nodes I need like 10. Im pretty sure I get paid on average about 60K just from the game plus the equity value increase est at 200-300K not sold though.

So I get while sleeping I make 21,900 off of SPT votes, SPS I make about 40 a day 14,600 Then I also get the airdrop points until the end which is a few hundered SPS I think so overall I get on the low end at 36500 while prices are down but we hit a few bucks Im rollin in 600-1000 a day lol. With land and validators etc coming out it should rocket as well as with supply slowing of rewards sps.

A decent deck you can get for a grand or two. I think I put 8K into mine lol. I didnt have much of a issue winning a few games to test.

Congratulations @groentje! You have completed the following achievement on the Hive blockchain and have been rewarded with new badge(s):

Yes splinterlands is good for their investors im jalous you got in early ;)