@costanza 72
about 2 months ago (Edited)
LeoFinance

I have been making multiple posts around the Splintertalk.io SPT token during the past year cost-averaging myself into a healthy position as it looked highly undervalued as a sleeper-coin. Now that it has gotten its first real use-case counting toward SPS airdrop points, the price exploded (just like everything else around the game). Today I'm bringing another update on my next course of action...

So far, I have made 5 posts about the SPT token (See Below) initially convincing myself to get into it and tracking my journey accumulating sharing my numbers during the 10 months after.

So I basically did 10 months of accumulation buying when it was trading below the maximum price range I set while staking everything delegating it to @monster-curator each and every day for a maximum compounding effect since they payout 100% of their curation rewards to delegators. The initial plan was to get 50$ worth of SPT, this increased to 1M SPT and later setting my goal to accumulate 2M SPT. I managed to reach ~1.8 Million paying somewhere between 200$-300$ for it before the price explosion and I know at least a couple who have been following my posts who also started accumulating. Special thanks also to @rentmoney for warming me up to continue accumulating after I reached my 1M goal. 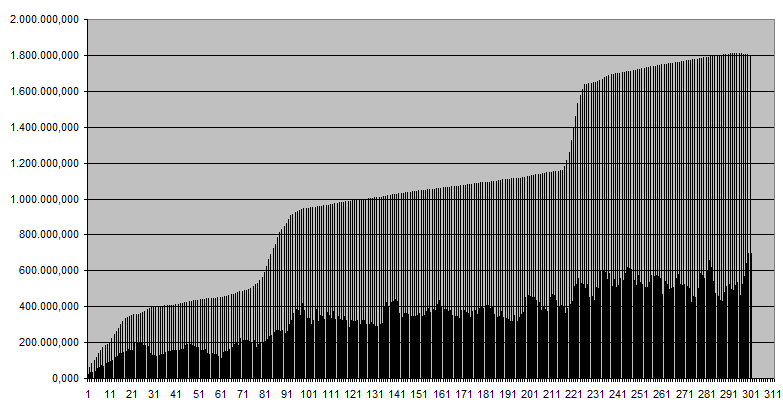 Right now, 1.8M SPT gives roughly gives 80 SPS daily from the airdrop (~26.6$ at the current price) and give-or-take ~1600 SPT from curation rewards each day (~10$ at the current price). These combined currently add up to over +100% APY which indicates that SPT currently still might be too cheap at the 0.00619$ price it currently goes for. The returns will for sure get diluted during the year as there is quite a big inflation on SPS while new Splinterlands cards and Assets will get printed sharing in the SPS airdrop points.

The plan has always been to accumulate and take some profit if it ever got a proper use case causing it to pump. The SPS airdrop requires players to hold on to their Splinterlands assets that count toward the airdrop points, and based on the numbers the current price SPT goes for, it arguably is still quite cheap (this can change quickly on both sides so who knows it can go up a lot more). This makes me plan to hold on to the 1.8M SPT that I managed to accumulate keeping it all delegated to @monster-curator while taking some profits on what I'm earning along the way from here on out. In the meantime, I will continue to look for similar opportunities to get into coins that I believe have the potential for massive upside by getting in early while nobody is watching making articles about them on my blog patiently waiting for one or more of them to take off just like SPT.

So basically Hodl what I have, Earn more by Delegating and continuing to make regular articles about Splinterlands, and Take Some Profit along the way. If I didn't already have a nice stack, I would still continue to accumulate what I earn delegating it along the way increasing my SPS airdrop.

Congrats to everyone who was able to accumulate SPT at cheap prices! I'm quite sure many will now all of a sudden start becoming Splinterlands Bloggers since a lot more can be earned. It will be interesting to see the price evolution of both SPS and SPT as they are very much linked to each other. I will likely make another update posts a couple months down the line and re-evaluate my strategy when the SPS airdrop gets closer to its end.

We are only 9 days into it with 354 days left to accumulate more in-game Splinterlands assets to increase your airdrop points. You should really look into SPT as it probably is the easiest way to get more SPS since anyone can earn it from blogging if they are willing to put in some effort.

What can i say, a good decision.

Congrats on reaching very close to that 1 Million SPT mark yourself!
It's nice to see more were able to jump on the opportunity while it was there.

Congratulations on your number of SPT tokens you have accumulated.
1.8M is a great quantity!
I have never sold an SPT token and now have about 600K tokens and my goal is to get to 1 million.
I created a curation account (@libertygame27) to vote for posts with the splinterlands/spt tag and optimize the accumulation of spt tokens and since I like the content you write on Splinterlands I added you to its automatic voting ;)
!BEER
!LUV
@tipu curate

@costanza, you've been given LUV from @libertycrypto27.

Thanks, I really enjoy writing about the game which makes it easy to put some effort into the content I'm making!

Nice to see you managed to get 600k+ yourself and good luck getting that to 1 Million! I'm still anticipating SPT getting more use cases in the future as for now the value mainly comes from the SPS airdrop.

Hey @costanza, here is a little bit of BEER from @libertycrypto27 for you. Enjoy it!

Thanks for the graphic and numbers )
Also congratz! Everything done smart way!
Tiny mistake which confused me a bit, because this article is the first time i heard of SPT tokens.
"which indicates that SPS currently still might be too cheap at the 0.00619$ price it currently goes for"
you got SPS but mean SPT.

They are two different tokens if im right SPS is th governance token and SPT is splintertalks....used for this community splintertalk.io

Thanks for pointing out the mistake I made, I fixed it. It can get quite confusing with similar names.

I'd say take a closer look at SPT (some of the older articles explain it properly), it's right now probably the best opportunities still for new players to grow their overall earnings in the game without the requirement for an investment.

Do this systematically for the next year pretty much and you should have done very well in the end.

Yes, you can earn SPT from blogging and being engaged on the splintertalk.io platform. Basically, you want to either join the weekly challenges from the @splinterlands account (those will mostly get upvotes on Hive), when you put some effort into your post (tip: making a custom thumbnail image already does a lot!) you are very likely to get picked up with an upvote from @monster-market which hold the majority of the SPT since passive investors who don't have time to do manual curation delegate their SPT allowing them to get passive returns as 50% of the upvote value goes back to the curators.

This is right now probably the best way to organically grow in the game.

Well done, costanza! SPT is a bet that has paid off well.

Thanks, being a Sports Bettor I guess really helped :-)

Those are some nice returns.

Congrats on pulling the trigger and getting yourself a nice sum of SPT tokens.

The same goes for you, congrats on reaching 600k SPT so far!

Wow! That is a crazy amount of money :) Enjoy the ride. I have discovered Splintertalk yesterday, so I wasn't aware about SPT.

Wow! AMAZING! A gamble that paid off big time for you. Congrats on being an SPT whale!