Last season I made my most expensive single card purchase by taking this Alpha Lightning Dragon off @patrickulrich's hands for $2000.

I already owned a Lvl 3 (4 BCX) and a single card but at the time the better deal was to go for the max, with a view to offloading the Lvl 1 and 3 cards at some point.

Below is the current market for the Alpha Lightning Dragon, and the current best price for a maxed card at almost $1500 more than what I paid for mine.

$2000 is the most I've spent on anything, minus the car, in a long time and I did spend a few days eyeing up the card and asking myself if it was a good idea or not. The decision was made easier though due to value of the various rewards Splinterlands provides, and hopefully the report below (provided by https://kiokizz.github.io/Splinterlands/seasonReportCard) supports this.

Happy with Champion III, although I wasn't too far away from the next rating and 40 more chests. I burned my mana trying to get there but it was just a step to far this time. Win streaks were few and far between, and these are essential late on in the season to push for a rank.

Shouldn't really complain about getting 'free' cards each day, but the Gold Foil Cards table is looking a bit sparse!

Fortunately, my luck has changed with the beginning of the new season and I picked up a gold Epic card yesterday. I don't play Life (or Death) and so this card has gone out for rent already and will probably bring in $2/3 a season, depending on how I manage my rentals.

I feel pretty lucky in that I can rent a bunch of cards and still keep higher level cards to play each day, and in brawls for my guild. I only rent a couple of max cards with the rest being duplicates or splinters I don't play. I've found during the rental boom that these lesser cards are readily snapped up, presumably by newer players looking to gain an edge in the lower leagues.

Business must be booming at peakmonsters.com too - they made almost $90 last season on my rentals alone.

SPS is currently priced at just under 43 cents following its ride up to a dollar in October. I'm trying not too sell too much at present and have instead opted to pool SPS with DEC at https://tribaldex.com/ or stake it on the Splinterlands site.

This provides a staking rewards boost and has helped with voucher allocation - a necessity if you are looking to get involved in the next card release - Chaos Legion. I've got 350 packs waiting to be opened so far, and think I'll stick at that tally until the general release (phase 2) is underway.

It's been a wild ride these past few months, could we see a 1 billion dollar marketcap in the near future?

Recently, I've been told not to diversify away from Splinterlands by someone with way more (game) assets than me. I think HIVE could outperform these assets in the short term, and so I'm pretty chuffed to have some of each going into the festive season.

I have 100 packs. I think that will do me for now with the prospect of picking some more up in phase 2!

I think phase 2 makes more sense for those not drowning in vouchers. I hope you get a legendary super rare big knackers card!

110 with the bonus, I forgot about that. Got my potions and everything all lined up!

Big knackers for me please!

I didn't even know about them before! Silly me!!

You are officially drowning in vouchers :P

If you wait for phase 2 then that will be plenty!

I don't play Life (or Death)

Do you realize that announcing this publicly is a bad idea? :)

now I will beat you everytime on a low mana battle :)

I've mentioned this plenty of times :)

And you beat me most of the time anyway!

Some laughs, love, and pizza, thanks Gillian! :)

That looks like an amazing card to use in battles so I think it will do quite well if you are fighting in ranked battles. As for the rental income, it's an amazing amount of money just for passively renting out your duplicates. I also rent out my duplicates and some cards that I bought specifically for renting.

Rentals are crazy at present, long may it continue!

$2000 looks huge, I bet you'd be surprised yourself how you can spend that much on a card, but then it just made sense, plus the resources was there and owning it could help you go a long way. I own just one pack and still crawling in the diamond leagues.

It is a big investment but hopefully it will pay dividends in time. And there's always the option of selling it or the lower ones.

Good luck moving up the ranks :)

Hey I had a noob question. I. Getting into this and wondering, how much DEC per win would I get at silver 3 or silver 2?

Do the chests give cards each season?

I'm honestly not sure how much DEC you will get at silver, I think it relates more to the cards you are using and the status of the guild. Older/gold cards give more I think.

There is a daily quest and the end of season placing that give chests - if you play each day then over the course of the season you should be picking up some cards - good luck catching a gold!

Thanks for the reply.

So I remember back then years ago I was easily able to get into gold, now that there is new cards i've had to learn some thing sin order to even get to bronze II !! Pretty crazy lol!

Do you know of where I might find a good strategy guide or youtuber who has good builds and what to do?

The thing I'm worried about is do Ineed to level up my summoners to level 3 so i can use level 4 commons and level 2 rares in battles to get into gold or not? Is it possible to reach Gold III with just level 1s?

On an unrelated note, Iam kicking myself hard for a few mistakes Imade. I accidentally listed some level 2s and 3s of Alpha cards for Level 1 prices... I accidentally made a big mistake by selling a Flesh Golem level 4 for 45 USD and a level 1 goes for that, so i lost like 350 USD:(

Yeah, I used to get to Champion 1 at the start, but people have way more powerful decks now and renting cards can boost a good deck to the top tiers.

Do you know of where I might find a good strategy guide or youtuber who has good builds and what to do?

I don't, and rarely see any strategy posts - playing and watching and seeing why you lost is how i've learnt to do ok.

The thing I'm worried about is do Ineed to level up my summoners to level 3 so i can use level 4 commons and level 2 rares in battles to get into gold or not? Is it possible to reach Gold III with just level 1s?

Summoners are pretty key to advancing up the ranks imo. I don't play at that level so couldn't give you an answer there. What I do know is that it's hard for me to get out of Gold 1 at the start of each season - it is really competitive at this level!

On an unrelated note, Iam kicking myself hard for a few mistakes Imade. I accidentally listed some level 2s and 3s of Alpha cards for Level 1 prices... I accidentally made a big mistake by selling a Flesh Golem level 4 for 45 USD and a level 1 goes for that, so i lost like 350 USD:(

That is a shame :( I know someone who would have liked that Gold Golem, he has 1/3 supply of the non-Gold Golems! 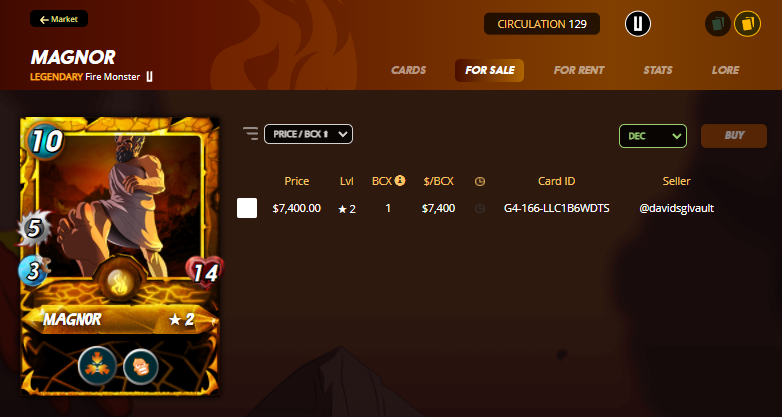 I'm glad to see we're taking this game seriously now. If you are at the lower end of the game, just play for fun and keep all your REWARD cards you'll be doing well in no time.

It is what I have done from the start and haven't really bought that many cards compared to some. I plenty of reward cards, just by turning up each day.

I don't play Life (or Death)

Noob question: do you not do daily quests? Those come up fairly often.

Also, a question I posted earlier today that nobody’s yet answered:

When battle conditions are displayed, I freeze up for a few moments, like a deer in the headlights. Then I notice the clock ticking down. Think man, think!
Even with generic rules, I often struggle deciding which splinter to use given my opponent’s five most recent battles. Is there an easyish way to make a not-stupid decision? A Rock Paper Scissors equivalent? If my opponent has played X a lot recently, Y might be a good choice for me?

I would say I miss 1/2 quests a season when Life and the Death (or vice-versa) appear. Sometimes I can make a whole season without them appearing next to each other though.

I never really look at what my opponent has played recently and just go for what I think is my strongest Splinter for the ruleset. If I was in the top 50 I think researching what my opponent was doing would become more important.

Recently, I've been told not to diversify away from Splinterlands by someone with way more (game) assets than me. I think HIVE could outperform these assets in the short term, and so I'm pretty chuffed to have some of each going into the festive season.

It is pretty wild to think that rental income is higher than my salary!

I assume once the bull market draws to a close then the game will also be kicking out less rewards, but it's a great time to be involved at present.

Thanks for the stats site!

Crazy times. I'm not all that optimistic, but it would be nice to see the economy maintain the boom after the airdrop finished. Let's see what CHAOS bring us :)

That's what I call an investment!

Your ranked DEC rewards and Rentals are outstanding.

Splinterlands has changed my view on spent funds. All of a Sudden cards that are listed for hundreds or in your case a couple thousand are looking like a steal.

Thank you for picking her up! I didn't realize I priced the card so poorly when I put it up 😆 but happy she's going to a good home! I hope she brings you many wins on the battlefield.

I love how this ecosystem works though! I definitely enjoyed playing her over the years but I was able to end up buying a new laptop last night that I've been wanting from mostly that card alone. Even if I set it considerably too low I really can't thank you enough on this! :)