Its been awhile since I hosted a Splinterlands giveaway and even longer since I gave away some Dark Energy Crystals (DEC) so lets remedy that in this post. Up for grabs in this giveaway will be 1250 DEC tokens. The rules to join this FREE RAFFLE can be seen below.

How Winners Are Decided

The timing of your comment will determine your Raffle Ticket number. The winning raffle ticket will be decided by a random number generator. The Hiven you tag in your entry comment will be the second place winner. That's right, tagging a fellow Hiven will mean you have entered them in a raffle for 250 DEC. You can earn a second raffle ticket for reblogging (must let me know you did so in your entry comment). That's it, its that easy folks! I'll hand out some tip tokens to comments that contain substance. Can't think of a topic: Let me know what you think of the new Reward System. 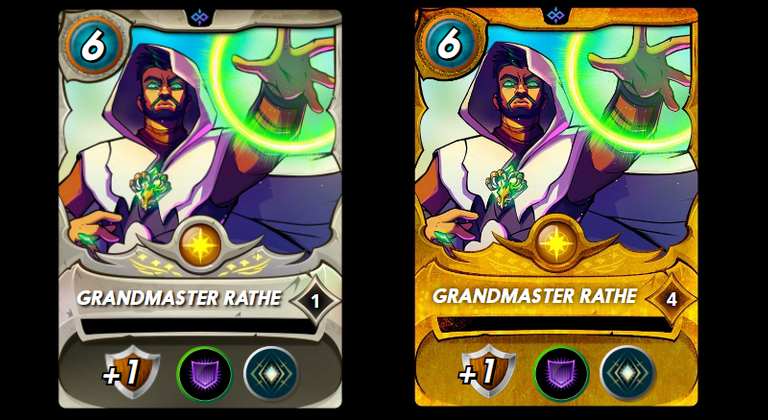 Grandmaster Rathe gives +1 Armor to all friendly characters, and then on top of that he imbues their armor with the ability to block Magic attacks through the Void Armor ability. Life characters are already the most heavily armored of all of the elements, and now they will no longer have a weakness against Magic-heavy opponents! As if that wasn't enough, Rathe also amplifies the effects of damage reflection abilities including Thorns, Return Fire, and Magic Reflect! Source

What we are looking at above is the very first Legendary Summoner airdrop for the Chaos Legion NFT set. It has three abilities in which are described above and the Summoner itself is of the Life Splinter. Personally I think the card looks great and looking at the screenshot I think I might prefer the look of the non-gold foil as opposed to the gold foil version. That's not to say the gold foil looks bad around the art (it doesn't) but for some reason I like the regular Life boarder around this specific artwork. As always the Card designers have out done themselves (Great Job). Currently there is roughly 353,000 more Chaos Legion Packs to sell before GrandMaster Rathe gets airdropped to those who qualify. Who Qualifies (Good Question)? Everyone who purchased at least One Chaos Legion pack before the remaining qualifying packs sell out can qualify. To be GUARANTEED one Grandmaster Rathe you would have need to of purchased at least 550 Chaos Legion packs from the official Splinterlands webpage. Each airdropped card received will have a 4% (or 1 out of 25) chance of being a Gold Foil version of the card.

Thanks for the giveaways. Please count me in. Reblogged.

I will try to win the 250 DEC for @vrezyy because he does some great giveaways too!

Thanks bro, I can sure do with some DEC

@rainydays this is a contest and I hope you receive the second place prize
@rentmoney I am reblogging Thanks for the contest !Pizza

Hey @methodofmad, here is a little bit of BEER from @isnochys for you. Enjoy it!

Count me in please
I'm tagging @engilhramn - check it out 1250 DEC up for grabs !

Who is sharing? I'm in too. This is sweet

Count me in! @engilhramn
Interested in a 1250 DEC raffle, @dubble ?

I want to be part @emeka4
@adedayoolumide
!LOLZ
!MEME
!hivebits

I was totally going to tag @monstermama which is my alt-account.

I will tag @a-secondchance since I haven't talked to her in a while and I know she is a splinterlands player.

@ifarmgirl You are very lucky, you will win for sure.

You're welcome. I hope you win. good luck.

Hope you will too :) May the odds be always in our favor, lol!

Check it out @wynella ... this could pay for 2 seasons of your guild fees ;-)

@wine.bot 53
2 months ago
Hi @braaiboy, You Do Not Have Enough WINEX Tokens To Make Another Successful Call.
Please Stake More WINEX Tokens.
(We Will Not Send This Error Message In Next 24 Hrs).

The new rewards systems seems to be quite punishing to the casual player. Where I could just get by with a few quick games a day, I now have to do alot more just to get the same amount of chests.

It's good that bots have reduced greatly in number though, but I won't expect it to last.

It really is! Ty for tagging!
!PIZZA
!PGM

Count me in please!
@investflow

@shoemanchu
See if we can’t get him to comment again?😂🤣

not tagging alt accounts? I'm sorry but we have customs and traditions around here

I want free DEC too!! Thank you! @cjlugo, take a look!

Hey @heroldius you should check out rentmoneys giveaways. Always good stuff and good info too. He reads all the stuff I want to read about games and crypto but never have the time lol
!LUV
his posts
!GIF brainiac

Thanks for the info... I'll check for sure

!PGM
@zottone444 may not wish to be tagged, but came to mind first for some reason

There are no problems!

Count me in please, thanks!
@ifarmgirl
Reblogged this by the way

Sis @coquicoin, you might wanna check this out. Good luck!

Thank you, sis! I will check for sure :)

May the odds be on your favor sis, hehe

I can't wait to get my hands on this Legendary Summoner. I'm trying to figure out how to use it to counter Yodin Zaku. So far all I've come up with is trying to load up my team with monsters with the Return Fire ability. But I don't think there are any in the Life Splinter :(


What do you say to comfort a friend who's struggling with grammar?
There, their, they're.
Credit: reddit
@rentmoney, I sent you an $LOLZ on behalf of @maakue
Use the !LOL or !LOLZ command to share a joke and an $LOLZ
(1/2)
0
0
0.000
Reply

Count me in, please!
IGN: @xheadhunterz
Reblogged
@dstampede If i win, I hope you win too XD Good luck, bro!
!HBIT
!LUV

Count me in @urkanon !PGM
@cpol give me luck :)

Hi... This looks like a good place to win DEC. Can I tag the guy who tagged me @theabsolute or should I tag somebody who wasn't tagged yet like @vikbuddy?


How many jazz musicians does it take to replace a lightbulb?
A-one, a-two, a one-two-three-four!
Credit: reddit
@rentmoney, I sent you an $LOLZ on behalf of @mineopoly
Use the !LOL or !LOLZ command to share a joke and an $LOLZ
(1/4)
0
0
0.000
Reply

count me in
@missquibble
!PGM

Well, not sure if you are here but hey @jazzhero

Hey, thanks for the tag! I'm mostly away, dealing with some errands. But I still play SPL daily and check Discord/Hive sometimes. Thanks again!

Count me in please @lorddiablo and my mate @arkasz, Thanks!

Count me in bro!

Thanks for the giveaway. Hey @cleanestelf897 let's win together.
!PIZZA

count me in as well!

@deathstarer7 , can check this out.

please count me in! tagging @assasinos3 in-case you're interested in a DEC giveaway my friend! :D

count me in and I reblogged!
I would like to tag @koodies
I think the new reward system is quite grindy

thanks if this is still running