Every now and then I (@rentmoney) like to have a straight up card giveaway. Looking at my blog its been awhile since I did that so its time to up my game. Here today I'm offering FREE Raffle tickets to win a Splinterlands Legendary Card. But what Legendary card, how about the Legendary card of the Earth Splinter known as DJINN BILJKA. For those who stumble upon this post and have no clue what I'm talking about, Djinn Biljka is an NFT that is playable in the Hive Blockchain game known as Splinterlands. Legendary cards are some of the rarest collectable NFT's in the game. These playable NFT's can be found in what is known as Booster Packs that currently cost $4 USD each or can be won in game play that is known as Rank Battle. These NFT's have an in game marketplace in which they can be traded for cryptocurrency. You can get started with Playing or investing in Splinterlands today by clicking here.

Lore taken from official Splinterlands Site. Dawn of the Djinn 1 of 4 - The Thousand Year War before the Splintering never really ended. Dozens of Belludae (ancient demons of war) officers had been taken prisoner, but their fates had yet to be decided. Belludae sorcerers of such a high degree were notoriously difficult to kill, so other plans had to be made.

The most powerful and oldest of the Belludae could not simply be killed by any physical means. They are able to change forms and escape nearly any situation. Just a few years before the Splintering, an Efreet magical discovery made it possible for Belludae souls to be captured from unmoving Belludae bodies. The trick is to trap the Demon in an item of value. Some of the Belludae elite were placed in jeweled flasks, while others were locked in chests. They were trapped in lamps, vases, ornate boxes and urns. All these objects, once sealed, were placed in a secure vault underground, and a few weeks later, the Splintering happened. A massive schism split the vault into pieces, warping and dividing the land and carrying the Belludae soul containers to different locations. There the containers rested for nearly 900 years. That's right folks to enter this giveaway and earn yourself a Raffle Ticket which will give you the chance to win the Legendary Splinterlands card known as Djinn Biljka all you need to do is leave a reply below in the comment section. But wait there's more, anyone who reblogs this topic (Tweets count) will get a second raffle ticket. Let me know in the comment section that you did so and I will make note that you have earned a second raffle ticket. For some of us its surprisingly hard to come up with a meaningful reply in a post about nothing so lets spice up this post a little. As noted any comment will count for a raffle ticket but if you are looking for a topic to discus I would like to know your prediction of what a Plot of Land in Splinterlands will sell for once Land has been implemented in game. Current (Feb/2022) price is $374 USD.

I want to participate
Reblogged!

I see land starting at 500, on Hive engine, when it gets implemented into the game. Reblogged

You could very well be correct.

We don't get to see that ROI very often.

It's quite difficult to predict, this is because we already know that land will now have use cases and hence the value will increase, but we actually do not know how much. However for prediction sake, I'll say $995

That is a fair prediction. I have seen plots reach near $1000 USD already and I think its likely we see them at that price again at some point.

Depends on the implementation... but I hope it will jump to $1.000
@arkasz

Consider me in..
!ALIVE
!PIZZA

Again with a great giveaway. I'm in! 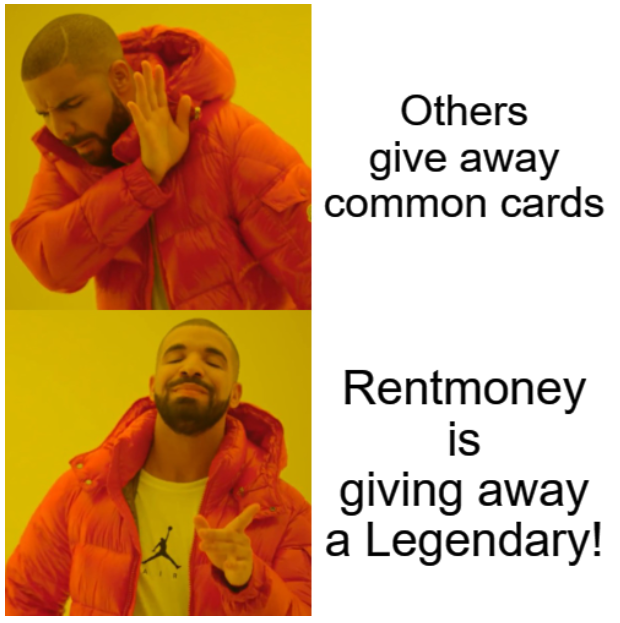 lolztoken.com
What rock band has a huge ghost following?
The Boo Boo Dolls.
Credit: reddit
@rentmoney, I sent you an $LOLZ on behalf of @captaincryptic
Use the !LOL or !LOLZ command to share a joke and an $LOLZ. (1/10)
0
0
0.000
Reply

Thanks for the !LOLZ and !PIZZA.

lolztoken.com
A rubber band pistol was confiscated from algebra class.
It was a weapon of math disruption.
Credit: reddit
@captaincryptic, I sent you an $LOLZ on behalf of @rentmoney
Use the !LOL or !LOLZ command to share a joke and an $LOLZ. (1/6)
0
0
0.000
Reply

Thanks in advance! @seeweed

Thanks for another awesome giveaway. Please enter me. @tinyputerboy

Nice card! Thanks for the giveaway chance. 🤞🏻

Thanks for the tip tokens.

In for the great giveaway and reblogged! I believe we’ll see land go up to about $950 once it’s implemented. !LOLZ !PIZZA

lolztoken.com
What did the painter say to the wall?
One more crack like that and I'll plaster you!
Credit: reddit
@rentmoney, I sent you an $LOLZ on behalf of @arpuch
Use the !LOL or !LOLZ command to share a joke and an $LOLZ. (4/10)
0
0
0.000
Reply

Count me in! And have a slice of !PIZZA

For the land it all depends on the rarity, my guess is the commons will be cheaper than now, while rares and on will be more than the current price.

Nice dude! Would Like to have this card in my collection! 😍

Oh and i reblogged🔥

lolztoken.com
What’s the best thing about Switzerland?
I don’t know, but the flag is a big plus.
Credit: thales7
@rentmoney, I sent you an $LOLZ on behalf of @technocrypton
Use the !LOL or !LOLZ command to share a joke and an $LOLZ. (3/4)
0
0
0.000
Reply

My guess is $400 for a plot of land when it does get released.

No idea what will happen with the land but I'm into this giveaway.
IGN: @chaos23

Ohh, I'd love to win Djinn Biljka. It's the only reward card that I'm still missing.

Also, I reblogged for the second raffle ticket!

I am in
@sideswipe81
Rebloged

Count me in for raffle, reblogged

Please, count me in! @eijibr

Count me in. IGN @MADJIMMY.

I wish I could buy a Land plot. It's way out of my league, unfortunately.

On the day Land is implemented, I think a plot will be $721. It will go down from there, then as people start to understand how to use it, plots will go over $1000. Reblogged of course.

Count me in! I'm hoping the value of plots blows up since I was able to get one before they sold out. I didn't know much about the game back then, but would have definitely bought more if I knew what I knew about the game now (even without knowing the future value of land).

That was simple, thanks!!

Legendary!
@redeculous
Thanks for the giveaway!

Great card that I use a lot. I would love to level him up though.

If rules suck, why should I follow them, huh?

Count me in!
Thanks!
@redco

count me in!
ign: @onefapman
I've also reblogged the post.
As for the plot price prediction. my prediction is it would be arounrd 500 USD. I think the current price of the plot is already near the peak price

Count me in!
@vrezyy
!PIZZA

Thank you for the opportunity @rentmoney!

I am fairly new, so I must say that I have no idea how much a Plot will sell for once implemented!

I like the ability to camouflage that gives you a few rounds of damage.
!PIZZA
!LUV

Not even thinking about the land expansion 'coz it's out of my range 😅 at least atm (who knows i might hit a jackpot before the release 🤣) but i think $777 is easily reachable.
Thanks for a legendary giveaway!
@harayatim

I remember I bought 2 of these when it is around 20usd. I bought him because of the sneak peek of Obsidian, I thought I can flip it. Ahaha. Wrong wrong move of me. Nyahaha.

Thanks for the chance and reblogged :)

My prediction is for $450!
Reblogged too!
Count me in 😊 @blitzzzz

Is this giveaway still going on?
Hi there, I am actually an OG of splinterlands, though I'm completely lost right now, haha, I played back in the alpha/beta deck days. The rules of the game were so much simpler then...I have screenshots somewhere of a couple tournaments I won :0)

Land was definitely not apart of it back then, but I would not surprised if a plot sells for a grand, probably even thousands down the road :0)

Still ongoing, all my giveaways usually run until post payout.

Most my deck is BETA, the game play certainly has evolved from early day play.

Hey @dreemit, here is a little bit of BEER from @rentmoney for you. Enjoy it!

Already won the epic card lately plus the HBD raffle so I won't win this one. But I agree with the meme below. Giving legendaries away is awesome!

Stoked to have a plot now as well, hoping land will be released soon :-)

I think the price for plots will go up but the common quality land will be quite a bit cheaper..